Following the council’s successful bid to gain a share of the Mayor of London’s Liveable Neighbourhood programme in March 2019, the south Chiswick Liveable Neighbourhood project was launched. This combines a range of schemes across the Grove Park and Dukes Meadows area that focus on increasing the number of trips made by foot, bike and public transport while improving local public space. To help shape these proposals, the Council ran a public consultation in late 2019 and collected data on traffic volumes, speeds and movements across the area.  You can learn more about the project and view the consultation comments on the project website here.

The feedback from residents, schools, businesses and local community groups was reviewed, along with traffic data for the area, and a series of measures were brought forward as part of the Council’s Streetspace scheme, announced on 7 May. These proposals aimed to transform the area into being a ‘low traffic neighbourhood’, preventing motorists from using residential streets as a cut through between major roads. This is being achieved through the introduction of a range of closures and access restrictions, which has significantly reduced traffic volumes and speeds in the area. This reduction in traffic volumes and speeds will help to improve safety on the roads, support people to undertake more physical activity and help sustain recent improvements we have seen in local air quality. In addition, two ‘school streets’ have been implemented to remove traffic from outside school gates at collection and drop off times, further improving safety and air quality while maintaining resident access to properties at all times.

The following pages also provide more detail on each project being taken forward. 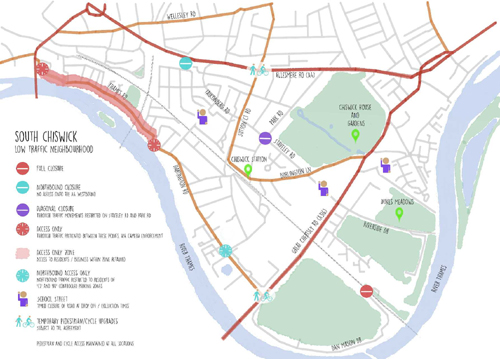