To help improve air quality, an Ultra Low Emission Zone (ULEZ) was introduced in April 2019 within the same area of central London as the Congestion Charge. It currently operates 24 hours a day, 7 days a week, every day of the year, except Christmas Day. The daily charge runs between midnight and midnight so vehicles travelling into the zone before midnight and leaving after midnight will need to pay for two days.

Most vehicles, including cars and vans, need to meet the ULEZ emissions standards or their drivers must pay a daily charge to drive within the zone:

Check a postcode to see if it is in the zone 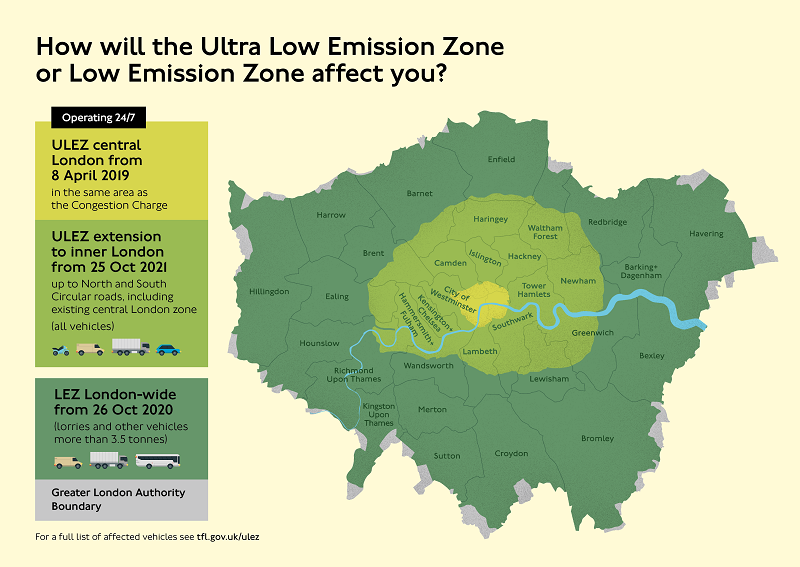 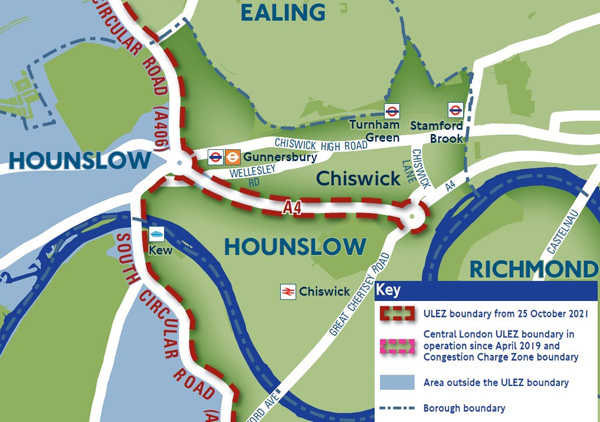 On Monday 25 October 2021, the ULEZ expanded from central London to create a single, larger zone up to, but not including, the North Circular Road (A406) and South Circular Road (A205). A section of the A4 between Chiswick Roundabout and Hogarth Roundabout is also excluded.

The scheme was introduced in Chiswick because air pollution limits are still being exceeded in the expansion zone and poor air quality remains the biggest environmental risk to the health of all Londoners. In January 2021, TfL wrote to all Chiswick and Brentford residents living within approximately a mile of the ULEZ boundary to notify them of the start of the scheme.

Charges and vehicle standards are identical to the central London zone. The charge applies to all vehicles, both residents and visitors if their vehicle does not meet the ULEZ standard. Some exemptions are available, for example vehicles with a disabled tax class will not have to pay the charge until 2025. For further details please see the full list of ULEZ exemptions.

Signs at every entry point tell you when you are entering the zone and advance information signs have been installed on surrounding major roads. If you are parked but don’t drive, you don’t need to pay the ULEZ charge.

The ULEZ is enforced by cameras that are able to read your number plate as you drive anywhere within the zone and will automatically detect whether or not your vehicle meets the ULEZ emissions standards. As with the congestion charge, drivers can pay in advance or on the day of travel online using the TfL site.

For more information on the operation of the expanded ULEZ, please visit TfL’s information pages. Residents may also be able to apply for the Mayor’s scrappage scheme for older vehicles.