One of the greenest boroughs in London has just got greener. 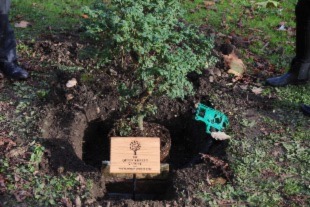 As part of the Queen’s Green Canopy legacy, Hounslow Council has planted a new tree on Feltham Green.

The tree becomes a commemorative mark of both Queen Elizabeth the Second’s Platinum Jubilee, and a celebration of her life as Head of State.

Holding particular significance in the area, Feltham Green will allow visitors and residents to follow the tree’s growth as it develops.

The ceremony, organised in partnership with Lampton Greenspace 360 and The Friends of Feltham Green group, was attended by Mayor of Hounslow, Councillor Raghwinder Siddhu, and Councillor Salman Shaheen, Cabinet Member for Parking, Parks & Leisure at Hounslow Council.

The planting also pays tribute to the imminent closure of UK MoD’s Defence Geographic Centre (DGC). The site has been part of the town’s history since 1914, which DGC’s Director, Ian Spencer, noted in his speech on the day.

Ian Spencer, Director of the Defence Geographic Centre, said: “2022 is the 60th anniversary of the nation's military geography and mapping capability taking up its current home at MOD Feltham. It’s set to close in the near future, bringing an end to over a century of military activity on and around Elmwood Avenue.

“We celebrated the anniversary and Jubilee by acquiring a miniature elm tree as part of HM the Queen's Green Canopy project, to be taken with us to RAF Wyton as a lasting memory of our long-time home on Elmwood Avenue, Feltham. We decided to acquire a second tree to be given to the people of Feltham as a lasting thank you, in recognition of their support to the many military and civilian Crown Servants who have worked in Feltham since 1917.

“I am very grateful to the Defence Geographic Centre team for organising the fundraising and acquisition of the trees, and to the Friends of Feltham Green and the London Borough of Hounslow for supporting and arranging the planting of the new Elm tree near the heart of Feltham.”

Mayor of Hounslow, Councillor Raghwinder Siddhu had the honour of planting the tree alongside Ian Spencer, and children from the local primary school.

November’s tree planting event brought together some of Feltham’s local organisations in support of the ceremony.  Hanworth Road’s new eatery, Emily’s Café, provided cakes, biscuits, and other refreshments for more than 30 attendees on the day.

As part of Hounslow’s commitment to tackling the climate emergency head on, the Council has pledged to plant 20,000 more trees by 2026, and increase all green infrastructure across the borough to 45%.

The Queen’s Green Canopy initiative works to create a living legacy of Her Majesty, while encouraging local authorities across Britain to plant more trees and increase canopy cover. Over a million commemorative trees have been planted across the UK between October 2021 and March 2022 alone.