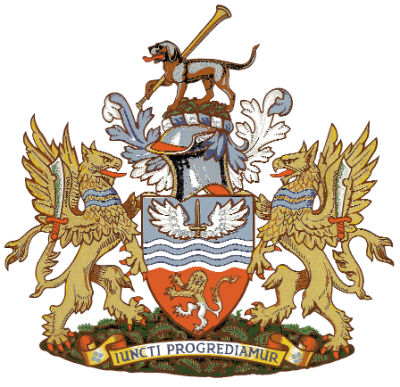 The shield is divided horizontally into two halves, the upper half blue, the lower half red and surmounting the divisional line is a white (or silver) wavy horizontal band charged with two narrow wavy bands of blue. On the blue portion of the field (background) of the shield is a golden sword held erect between two white wings, whilst on the red portion is a rampant lion, the upper half of which is gold, the lower white.

This is displayed upon a helmet (as traditionally used by civic authorities and corporate bodies) wreathed and mantled on the white and blue tinctures of the Coat. It is composed of a black Talbot (hound) standing in ferns depicted in natural colours and supporting over its shoulder a golden post horn.

The hound is intended to provide a ‘play’ on the name Hounslow and the post horn alludes to the extensive posting business of that place in former times.

Supporting the shield on either side is a golden griffin. Both are collared with a pair of blue wavy bars or banks and are marked on their wings with a seax (a scimitar like sword) with red hilt and pommel.

These Supporters are those granted to the Borough of Brentford and Chiswick in 1932, heraldically differenced by the introduction of the seaxes in reference to the fact that the districts comprising the London Borough of Hounslow are all within the County of Middlesex.

The achievement rests upon a compartment depicted as a grassy mound strewn with fern (into which may be read some illusion to Hounslow Heath) and on the mound is set in customary fashion a scroll bearing the Latin motto adopted by the London Borough of Hounslow, Juncti Progrediamur, Let us go forward together.

Between two white wings, each charged horizontally with a pair of blue wavy bars, is set a seax erect hilted and pomelled red the blade proper and surmounted of a golden lion’s face.