Heritage of London Trust, the London Borough of Hounslow, Thames Water and the Drinking Fountain Association have worked together to fully restore one of London's historic drinking fountains. 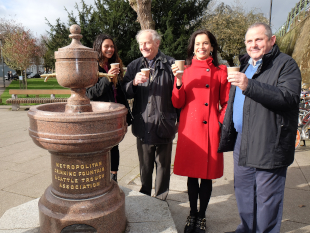 Local residents and visitors will now be able to refill their water bottles without having to buy single use plastic bottles, saving money and helping the environment.
Thirsty dogs will also be able to use the drinking fountain thanks to the period dog trough!
At a time of global concern about single use plastics, this partnership shows how London’s historic fountains can play their part in helping address plastic pollution. The average London adult buys more than three plastic bottles every week or 175 bottles every year. In total, some 7.7 billion plastic bottles are brought across the UK every year. 80% of litter in the Thames is single use plastic, with water bottles being one of the most common.
The fountain is just metres from Turnham Green tube station and at the edge of the park, offering fresh drinking water for commuters, dog-walkers and children on their way to school. The drinking fountain was gifted by the Metropolitan Drinking Fountain and Cattle Trough Association in 1902, and cost £20 to erect. The Metropolitan Drinking Fountain and Cattle Trough Association (MDFCTA) set up drinking fountains across London from the 1850s to early 20 century for public use. There are over 100 listed drinking fountains in the Greater London area. The vast majority are no longer in working order. Many, such as this one, are located in public parks and gardens or close to tube stations.
Hounslow Council, Heritage of London Trust, a team from London Stone Conservation, Thames Water and the Drinking Fountain Association have all worked together to restore the fountain. The rose granite fountain had lost its finial on top and its spouts were not working. The spouts have been reconditioned and Thames Water has installed completely new piping to run fresh drinking water from the mains water supply. The historic lettering around the plinth has been restored and regilded.
The total project cost was £14,000.
The fountain is located 20 metres from Turnham Green tube station, on the edge of Chiswick Common.
Dr Nicola Stacey, Director, Heritage of London Trust, said: “Historic drinking fountains are found in every London borough but the vast majority are not  working. They offer a really easy way to make London more sustainable. We’re so pleased to have worked with Hounslow Council, Thames Water and London Stone Conservation to bring this one back to life and we hope that it will be one amongst many across the city reducing plastic waste and keeping Londoners hydrated.”
Tom Grant, Executive Projects Manager, Thames Water, said:
“It’s great that the fountain will give even more people access to our world-class tap water while they’re out and about and we hope it will be well used.”
Cllr John Todd, Hounslow Council, said: “Firstly, a big thanks to the Heritage of London Trust, Thames Water and the Drinking Fountain Association for reopening this historic water fountain. Personally, I have been working with local Chiswick residents on this particular fountain for over a year. This pales into insignificance when you look back at its history which I am reliably informed goes back to the wonderfully named Cattle Trough Association in 1902 when it was first installed”.
Cllr Steve Curran, Leader of Hounslow Council said: “I am delighted to be here today in support of Cllr Todd and all the work he has done in bringing this lovely fountain back to Turnham Green. There is no doubt this is a wonderful feature and as Leader of the Council, I will be making every effort to install further water fountains throughout the borough over the coming years”.