An NHS mental health worker has won the top prize in an LGBT+ Poetry competition run jointly by Hounslow Council and the West Thames College, Isleworth. 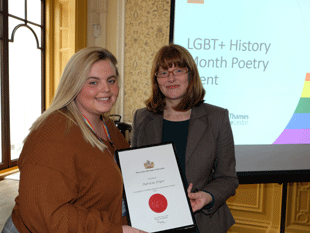 Patsy Fryer works as a Senior Administrator in Isleworth’s Centre For Health and describes herself as ‘…. a poet, an advocate for mental health and the ‘L’ in LGBTQ+’.

Patsy, 25, has worked in the mental health area for the last 20 months and in her spare time loves nothing better than writing poetry.  She has just released the kindle version of her poems called ‘To Bloom And Beyond’, which she published on World Mental Health Day last October, donating the proceeds to the Samaritans.

Indeed, the Samaritans is very close to her heart as one of closest friends sadly took his own life, and much of her poem ‘closet killer’, is devoted to him and his troubled life.

Patsy says: ‘It was written during a very hard time - as you can probably tell from my poem - and was wordy retaliation to a friend who took his own life for who he was and his feelings in regards to coming out, something which I've done in my life time.’

In her poem she movingly refers to a key moment in her life:

the tracks of my tears

and the tracks of my scars, on my arms

tell a story of how I was the lucky

who learned to love herself

enough to come so far,

Cllr Katherine Dunne, Cabinet Member for Communities and Climate Emergency, who along with Cllr Richard Eason judged the entries said:  ‘Patsy’s entry jumped off the page at me and created such a powerful image of her life - as she put it, the ‘L’ of LGBTQ+.  After all, we asked entrants to make their entries relevant to the LGBT History Month which we are celebrating today at West Thames College, and Patricia certainly did that.

‘Just the first few lines of her lengthy poem was such a brilliant opening – you couldn’t wait to read on: closet killer began:

why the hell does it matter?

love is love they say

so why should it matter

how I label myself?

'she swings both ways' they say

but why should it matter who I date?...”

Cllr Dunne continued: ‘Congratulations to Patsy and all the other winners. This event follows on from the hugely successful Black History Month event at the College which I had the pleasure of chairing last year.  Certainly, the LGBT History Month is another important milestone for us here at the Council, as we have just last month passed the motion to support schools in providing LGBT+ Education.  The poetry event was a brilliant way of drawing attention to important issues faced by LGBT+ residents.’

Patsy read out her poem to the 60 odd people gathered for the LGBT+ event and was presented with her prize of a £60 gift voucher by Cllr Dunne.

The winning entry in full:

why the hell does it matter?

love is love they say

so why should it matter

how I label myself?

'she swings both ways' they say

but why should it matter who I date?

wrapped in the arms of a man

add a wo, it's the same feeling.

and safety and home are still

regardless of what sits underneath

all the empty parts of my heart.

as I lay my head on their chest,

or on their breast,

the echo of their beating life ripples

through my soul at a hundred miles

it is the exact same.

if I closed my eyes

and either of them placed their

lips upon my lips,

or their hands on my hips,

how would I know

who was a woman or a man?

the only thing I can

say is, the after glow

and tingle of their lips leaving mine

would feel the same.

of each person I see is a soul of an

endless story waiting to be read.

waiting to be lived and shared.

however people identify the pigmentation of people's exterior

that they undecided to grow into, why

nothing should matter when it comes

but we as a society are so concerned

so we can fit into a box

and then worst of all... rejection.

why does it matter

whoever in this world

can make you smile,

make your world spin when you didn't

even want it to spin at all,

every single time you fall,

WHY? DOES? THIS? MATTER?

love is the one thing that survives of

us when we're gone,

so why can't it automatically be accepted?

just for the fear of simply being rejected,

for an emotion towards a certain

someone that is out of their the control.

something is seriously wrong.

the tracks of my tears

and the tracks of my scars, on my arms

tell a story of how I was the lucky

who learned to love herself

enough to come so far,

life shouldn't be about

having to label yourself

to cure the doubts of those

who questioned who you are.

I love who I love.

love who you love.

don't deny yourself of happiness

in the fear of being judged,

it doesn't matter who it's from,

there is no better feeling than being loved.