Hounslow Council marked Holocaust Memorial Day, a day for remembering those affected by the Holocaust and genocides all over the world 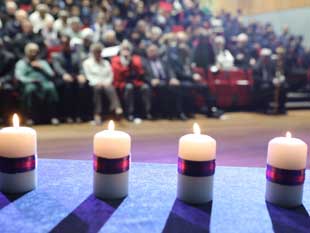 Hounslow Council marked Holocaust Memorial Day, a day for remembering those affected by the Holocaust and genocides all over the world, by supporting a special event in the borough yesterday. The event this year marks the 75th anniversary of the liberation of Auschwitz-Birkenau, as well as the 25th anniversary of the Genocide in Bosnia. The Reverend Richard Frank, Area Dean of Hounslow, led the moving service and prayers, with the pupils and staff of St Marks Catholic School contributing music and an art display. The school also hosted the service.

Councillor Tony Louki , Mayor of Hounslow and Councillor Steve Curran, Leader of Hounslow Council were joined by councillors, pupils and others to light candles to remember the lives lost and take a moment to contemplate the suffering of those in the Holocaust, under Nazi Persecution and subsequent genocides. The theme for this year’s commemoration was ‘Standing Together’.

Holocaust Memorial Day is officially marked on 27 January every year, with services taking place on and around that time. It marks the same date in 1945 when the Auschwitz concentration camp was liberated nearly eight months before World War Two officially ended.

In the five years Auschwitz was open, an estimated 1.1 million people were killed at the concentration camp, around 90 per cent of whom were Jewish.  Approximately six million Jewish and five million non-Jewish people were killed in the Holocaust. Tribute is also paid to all those killed or affected by genocides across the world.

“This year’s Holocaust Memorial Day marks the 75th anniversary of the Red Army’s liberation of Auschwitz and we also observe 25 years since the Srebrenica massacre in Bosnia. Whilst memorable as key anniversaries, it should not be forgotten that the seed of genocide starts with the rhetoric of hate, and this has been the same throughout time.

“I would like to thank everyone who shared this time of reflection with us, particularly Natalie Cummings who gave us so much to consider about the personal stories behind historic tragedies.

“Hounslow is very proud to support this event to mark Holocaust Memorial Day. It’s something we have done for many years and is one of the most important events in our civic calendar. I would also like to thank Reverend Richard Frank who led the proceedings, along with the pupils and staff of St Mark’s Catholic School whose performances and contributions made the service so moving and so special.”