As flu levels increase nationwide, Public Health England (PHE) has activated the Catch It, Bin It, Kill It campaign to help prevent the spread of the highly infectious disease. 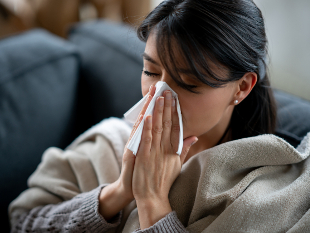 The digital and print campaign encourages the public to carry tissues and use them to catch coughs and sneezes, bin the used tissues as soon as possible and then wash their hands to kill the germs. Aside from the vaccine, good respiratory and hand hygiene is the best way to prevent the spread of the flu virus, which can live on hands and surfaces for 24 hours.

Nationally the flu season started slightly earlier this year, with outbreaks in the North West and North East of England, particularly among under-15s. Latest surveillance data from PHE shows that GP consultations in London for Influenza-like Illness have risen by 34% from week 49 to week 50, although the impact of flu on hospitals across the city is currently at a lower than expected levels. Since week 40 (30 September), 17 flu outbreaks have been reported in London mostly affecting schools.

Dr Deborah Turbitt, Public Health England’s London deputy director for health protection, said: “Flu is on the increase so we’re asking Londoners to make extra effort with their hygiene to help stop it spreading. Already this winter we have seen a moderate number of flu outbreaks in London mostly affecting schools and it is usually a matter of time before it gets into hospitals and care homes where it can have a much bigger impact.

“To stop flu spreading get your vaccine now if eligible and use tissues to trap germs when you cough or sneeze, wash your hands often with warm water and soap, and bin used tissues as quickly as possible. Catch it. Bin it. Kill it.”

Cllr Katherine Dunne, Cabinet Member for Communities and Workforce at Hounslow Council, said: “Flu is a nasty illness and could leave you unwell in bed over the festive period even if you’re usually healthy. According to the latest PHE figures, only 36 per cent of our primary school children residents have taken up the flu vaccine against a London average of over 43 per cent so I would encourage anyone who hasn’t had their jab, whether adult or child to do so before Christmas so you and your family can relax and enjoy the holiday period and follow the Catch it, Bin it, Kill it advice.”