Seven boroughs compete to be next London Boroughs of Culture

Seven boroughs from across the capital have been invited to City Hall to present their bid to be the next London Borough of Culture. 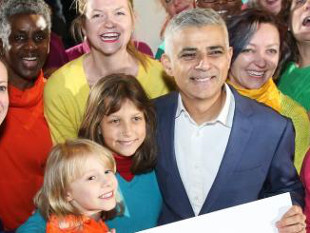 Croydon, Greenwich, Hounslow, Lewisham, Haringey, Hammersmith and Fulham, and Sutton will compete to become the London Borough of Culture for 2021 and 2023.

The two winning boroughs will each be awarded £1.35 million to deliver an ambitious programme, placing culture at the heart of their communities and celebrating the unique character of local people and places.

Boroughs can also win Cultural Impact Awards, each receiving up to £200,000 to deliver cultural projects. The successful bids will be announced in February.

The London Borough of Culture is a major initiative launched by the Mayor Of London, Sadiq Khan, inspired by the UK City and European Capital of Culture programmes. The competition has fulfilled one of the Mayor’s key manifesto pledges by strengthening London’s reputation as an international powerhouse for culture.

The inaugural winner in 2019 was Waltham Forest, whose programme included more than 1,000 cultural events, workshops and activities across the year, and involved all 88 schools in the borough. Some of the highlights included 70,000 visitors attending the opening weekend Welcome to the Forest, 1,500 children making tin toys in Leyton as part of Atomic 50, 100 international musicians coming together to perform to 3,000 people for Africa Express, and a spectacular closing show last weekend with Forest Uprising.

Brent will be the London Borough of Culture for 2020, and last month announced a bold programme, curated by young people and including events at Wembley Park, new work by Zadie Smith and the return of the MOBO Awards to the borough.

The success of the London Borough of Culture programme has captured global inspiration, with Argentina’s capital, Buenos Aires, now running their own ‘Barrios Creativos' programme, inspired by London.

“We created the London Borough of Culture to give Londoners a chance to create and enjoy world-class culture on their doorstep. Waltham Forest’s programme has shown its power to bring together communities and inspire young people, and Brent’s exciting programme for 2020 is set to continue this success. We look forward to hearing more about boroughs’ bold plans for 2021 and 2023.”

“It’s great news to hear that we have been shortlisted for the London Borough of Culture 2021 award.  We are one step closer to making this happen for Hounslow and along with our cultural partners and communities, we are very excited and ready for this.

“Winning this award would be a fantastic boost for Hounslow and would enable us to kickstart an unstoppable movement of people, ideas and opportunity throughout the borough, creating better community cohesion, unlocking potential and opportunity while showcasing the borough’s wonderful assets to the wider London community and beyond.”

For more information on our London Borough of Culture 2021 bid, and our proposed programme, please see: GoHounslow.com