The London Borough of Hounslow has conferred the Freedom of the Borough on Chiswick resident, Mrs Pat Davies at a special ceremony in Chiswick Town Hall 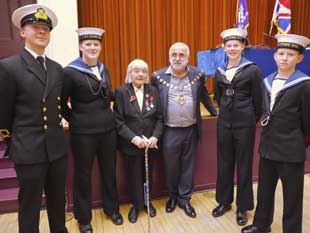 During World War Two, Pat worked at the listening posts know as Y Stations intercepting and transcribing secret German military communications and then sending them via teleprinter to Station X where the codebreakers worked in Bletchley Park. Her sister, Jean was a cipher clerk and cryptographer who worked for the Special Operations Executive (SOE).

Pat was given her Freedom of the Borough for her outstanding work during the war, where as a teenager she joined up as a Royal Navy wren. Her ability to read, write and speak German was soon spotted and resulted in her being posted to various secret east coast listening stations and assigned the task of interpreting intercepted German naval messages.

Following a successful academic career at St Andrews, Yale and Oxford she worked as a journalist for the Daily Mail in Manchester where she began her TV career as scriptwriter and then trainee producer at the newly formed Granada TV. She then joined the BBC and created the formats for and then produced University Challenge, the Sky at Night and Ask the Family. Pat remained a close friend of Sir Patrick Moore until his death.

At the BBC she produced the famous edition of the Sky at Night during the moon landings of 1969 working closely with well known presenters, Sir Patrick Moore and James Burke.  Sir Patrick, of course went on to present the programme in an unbroken sequence for over 50 years.

Pat was also recently awarded the Legion D'Honneur, the highest French order of merit, by the French Government.

Cllr Tony Louki, Mayor of Hounslow who presented the award to Pat said: “I am delighted to confer this Freedom of the London Borough of Hounslow award to Pat Davies and personally offer my congratulations on her remarkable life.  It is only recently that full recognition has been given to the Bletchley code-breakers and now we know what outstanding and crucial work they did during World War II.

“To have a second career producing one of the BBC’s most reknowned TV programmes, The Sky At Night further adds to her reputation.  Many people, both at the time and since, have appreciated the then live and great footage of the Apollo 11 expedition to land on the moon and for this too, Pat Davies' role in liaison with NASA and as BBC producer is also lauded."