The historic competition to fly from Hounslow Aerodrome to Darwin, Australia, has been marked by the council. 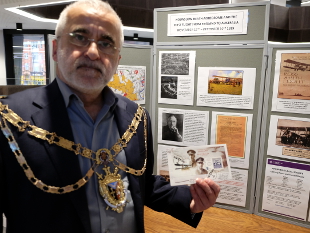 The historic competition to fly from Hounslow Aerodrome to Darwin, Australia – the challenge posed by the Australian government of the day – has been marked by a commemorative exhibition at Hounslow Library.

In 1919, the Australian government offered £A10,000 for the first Australians in a British aircraft to fly from Great Britain to Australia. Of the six entries that started the race, the winners were pilot Ross Smith, his brother Keith Smith as co-pilot, and mechanics James Bennett and Wally Shiers, in a modified Vickers Vimy bomber.

The competition conditions stated that the aircrews must all be Australian nationals, the aircraft must have been constructed in the British Empire, the journey must be completed within 30 days, and be completed before midnight on 31 December 1920.

The Vimy left Hounslow Heath at 8am on 12 November 1919, finally reaching Darwin at 4.10pm on 10 December, after a number of scheduled and occasionally unscheduled stops along the way.

“So, it now takes less than seventeen hours to fly non-stop from Heathrow Airport, Hounslow to Perth, Australia, but we should never forget the pioneers.  Pilots Ross and Keith Smith and their engineers Jim Bennet and Wally Shiers who took the £A10,000 challenge and arrived there 28 days after they set out from Hounslow Heath Aerodrome on this day, 12 November, back in 1919; they made 22 stops on their way.  Not celebrated enough, here in the United Kingdom, but their achievement remains part of our borough’s continued premier position in world connectivity.”