All aboard! Hounslow brings London Borough of Culture bid to City Hall by bus

London Borough of Culture is an award introduced by Mayor of London, Sadiq Khan, putting culture at the heart of communities 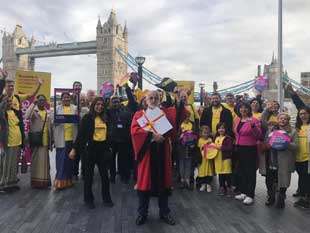 Hounslow is bidding for 2021 and brought its bid to City Hall aboard a campaign-branded vintage 1963 routemaster bus, courtesy of RedRoutemaster, the Brentford-based bus-hire company.

Hounslow Council has run a high-profile campaign over the past few months using the #GoHounslow tagline. The campaign which has been emblazoned across the borough’s bill boards and very active on social media, is a confident declaration that Hounslow really wants this opportunity and is ready for it.

A delegation from Hounslow; led by Leader of the Council, Cllr Steve Curran; Mayor of Hounslow, Cllr Tony Louki; and Lead Member for Leisure Services at Hounslow Council, Cllr Samia Chaudhary made the journey to City Hall yesterday. They were joined by representatives of Feltham Arts, Watermans, Creative People & Places, Tale Be Told Theatre, Kempton Steam Museum, Speak Out Hounslow and Artjar as well as various writers, residents, local musicians, community groups and journalists from Hounslow, approximately 60 people in all.

The borough’s bid uses culture as a catalyst to create an unstoppable movement of people, ideas and opportunity. The concept of a ‘Culture Superhighway’ will unlock opportunity, connect people, and celebrate the borough’s cultural gems.

The borough’s bid outlines an exciting programme of cultural events and initiatives that will bring different people together, sharing their time, their ideas and their energy. Extending the borough’s reach and connecting to the world, the borough will use digital and local platforms to showcase local stories; engage and inform others; re-connect people, organisations and places and re-affirm Hounslow’s position as the gateway to London. If successful, the borough will connect its communities and journey them through all parts of the borough to access and participate in culture like never before.

The route to City Hall took in some of Hounslow’s cultural hotspots, beginning at Feltham Arts Centre, before proceeding to Bell Square in Hounslow. The bus then stopped at Waterman’s Arts Centre in Brentford, followed by Gunnersbury House and then Chiswick House before setting off for City Hall.  Once they arrived, the delegation proceeded to the entrance of City Hall, where they were joined by Seema Malhotra MP and greeted by Cllr Tony Arbour, a member of the London Assembly representing South West London and a former Richmond councillor. Mayor Louki and Cllr Curran presented Cllr Arbour with a symbol of the borough’s intent in the form of a Hounslow Culture Superhighway ticket in a presentation box.

City Hall will release information on a shortlist of bidders for 2021 and 2023 before Christmas, with final winners announced in January 2020. While the judges evaluate competing bids, Hounslow will continue to promote its vision for 2021, working with partners and stakeholders to raise awareness and support across communities.

Cllr Samia Chaudhary, Cabinet Member for Leisure Services at Hounslow Council said it was a memorable day out for all concerned:

“Bidding for the London Borough of Culture 2021 has occupied a huge part of my life these last few weeks, so it was absolutely fantastic to see all the different threads coming together on our wonderful journey to City Hall yesterday. The Route Master bus was packed full of local people; adults and children and it was obvious to see their huge enthusiasm for our bid to develop a year-long cultural programme and to set in train lots of investment and opportunity to really put Hounslow on the map.

“Finally, I must give a special thanks to the London Route Master Bus company who gave up their time and services for free to drive our delegation all the way to City Hall and back again in such an impactful and special way. It was lovely to see so many passers-by wave at us, take our photo and generally give us their best wishes too”.