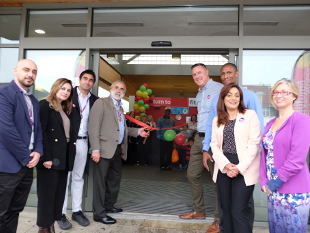 The investment has meant a full refurbishment into both swimming pools and changing areas, full replacement of all gym equipment inclusive of cardio machines and free weights and a re-decoration of key areas of the centre. The local centre management team facilitated an open morning for the official opening, with an exciting programme of taster events and classes, including:- Lagoon pool disco, Taekwondo demonstration and taster tennis lessons.

Cllr Samia Chaudhary, Cabinet Member for Leisure Services at Hounslow Council said: “This is an excellent example of showing our residents exactly where our investments are going and none better than the Isleworth Recreation Centre.  It really is something for the people of Isleworth and the rest of the borough, to be truly proud of.  Its facilities are second to none, and having seen them at first hand, personally I am already looking forward to the Lagoon Pool Disco.  And if you don’t know what it is – came and see for yourself”.