With just two weeks to go before this year’s Beat The Street competition comes to an end, Springwell School and Hounslow Town School are virtually neck and neck having earned over 100,000 points each. 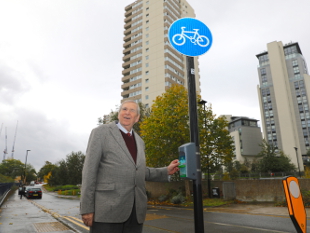 St Mary’s Isleworth is a close third with over 90,000 points accrued. Collectively, the people of Hounslow borough have accumulated over 77,000 miles - that’s more than the whole total of 2018.

As part of Hounslow’s reminder for people to increase their exercising, the council allocated the job to one of its biggest fans, Cllr Mel Collins. He loves nothing better than to walk the streets of his beloved Brentford Ward and everything in between on his many visits to Hounslow House.  The partially sighted Councillor who has lived in Brentford for over 70 years, knows where everyone of his Beat The Street boxes is located, as he showed our photographer exactly where to go today. His regular haunts of St Paul’s Church, Trimmer Walk in Netley Road, Green Dragon Lane, Our Lady & St John’s Primary School, and the Coach & Horses pub in Syon Lane were all visited as he proudly pressed his card on the box to increase his mileage.

He said: “This is a great initiative and I personally love finding new locations when I am out and about.  There are nearly 150 boxes in the borough and it feels like I have visited every one of them, although I am nowhere near to achieving that.  My congratulations to Springwell and Hounslow Town on leading the field, but there is still time to overtake them.”

Cllr Guy Lambert, Cabinet Member and fellow Brentford Ward Councillor says: “Well done Mel for reminding us all to keep Beat the Street going. I refer affectionately to Mel Collins as The Melvinator because, despite being even older than me and having very limited vision, he is so dedicated to LBH and its residents. Not only does he put in a full shift in the ward but he also sits amongst other things on the Planning Committee, on the London Road Safety Council and chairs the Joint Health Overview and Scrutiny Committee covering all West London Boroughs, so he’s forever zooming off around London. I’m very proud and privileged to have him as a colleague”

Beat The Street finishes on 30 October.