This World Car Free Day Londoners can enjoy hundreds of free events and activities for people of all ages and abilities across 20km of traffic-free roads around the City of London. 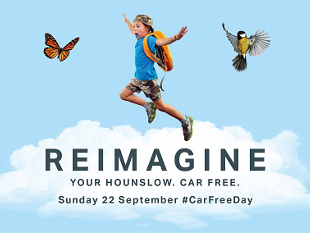 The celebrations aim to get Londoners to ‘Reimagine’ their city car-free, while walking, cycling and using public transport to explore the city to help improve air pollution and reduce car emissions. The celebrations will join up with the Totally Thames Festival and Open House London, to deliver a wide-ranging free programme of activities over the weekend.

Bank Junction is being transformed into a car-free festival space, with a picnic area and musical entertainment on a solar-powered stage. Visitors can try out a hedge maze in Cheapside and car parking spaces will become ‘parklets’ filled with games, gardening and places to sit and relax with music. Children will be able to build and race their own go-karts in Poultry.

Activities centred around five themes – move, chill, taste, play and show – range from street food stalls and arts and crafts for children, to a Tower of London historical re-enactment of the Peasants’ Revolt of 1381. Everyone is invited to come and check out the pop-up playgrounds, guided walks and bike rides on traffic-free roads, art installations and BMX rides.

Santander Cycles is also offering free hires across London on Car Free Day to encourage people to cycle to and from the event.

Within Hounslow, 14 streets have applied to close off their streets to traffic on World Car Free day following a campaign run by Hounslow council.

Air pollution is one of the biggest health emergencies of our generation, with more than two million Londoners living in areas that exceed legal limits for NO2, including more than 400,000 children under the age of 18.

More than 50 per cent of London’s toxic air pollution is caused by vehicles, but a recent TfL survey* found that almost one in two Londoners did not realise vehicles were the main cause of air pollution, although three in four Londoners were worried about the health impact. More than half of Londoners think you can always see when pollution is bad in the capital – when in fact many pollutants are invisible and can be present in air that looks ‘clean’.

“London is leading the way in innovative measures to improve air pollution and I want this year’s Car Free Day events to be the best of any world city. This will be a great opportunity for us all to leave our cars behind and explore our streets by foot, or by bike.

“We’ve called our range of events ‘Reimagine’ so that Londoners get an idea of what some of the busiest parts of our city would be like without cars and traffic. There will be tons of performances and activities for people of all ages to try and enjoy.

“I encourage as many Londoners as possible to join in the fun and see the city from a different perspective. I will continue to work with those boroughs who are forward-looking and want to think differently about how to use road space. Hopefully this will shame into life those boroughs with outdated views who are dragging their feet”

“This is yet another wonderful initiative by the Mayor of London in his quest to tackle the biggest health emergency of our generation by improving air quality through promoting sustainable modes of transport for Londoners and reducing harmful traffic emissions.

“Since declaring a climate emergency in June, Hounslow Council is currently developing a strategy to become a carbon neutral borough by 2030 and ultimately a zero-carbon borough by 2050. We cannot achieve these ambitious targets without all rethinking our relationship with cars and shifting to sustainable modes of transport.

“I know that many of our residents will be looking forward to the celebrations this Sunday either joining the festivities across the capital or enjoying their streets with their neighbours as part of our Play streets scheme.”

To find out about holding your own Play Street see: www.hounslow.gov.uk/playstreets