Victims of road collisions are speaking out about the devastation they have experienced, to coincide with Vision Zero Week which runs from 22 – 28 July. 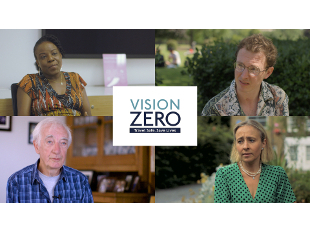 One year on from the launch of the Vision Zero Action Plan, which outlines how the Mayor of London, Transport for London (TfL) and the Metropolitan Police (the Met) are working to eliminate death and serious injury on London’s streets, victims of road collisions are speaking out about the devastation they have experienced, to coincide with Vision Zero Week which runs from 22 – 28 July.

In 2018, the number of people killed on London’s roads fell to the lowest level on record, from 131 in 2017 to 111 in 2018. While this decrease is welcomed, a new campaign launching today, ‘Know My Name’, shares the stories of five victims of road trauma to communicate the impact it has on people’s lives and our shared conviction that even one death or serious injury is one too many.

Since launching the Vision Zero Action Plan one year ago in London, TfL, the Met, City of London Police and many boroughs and organisations in London have been working towards helping to achieve the goal. This includes transforming London’s most dangerous junctions, increasing enforcement against reckless and dangerous motorists who put lives at risk, tackling rogue operators and developing a new standard that seeks to remove the most dangerous HGVs from London’s roads, building protected cycle lanes, lowering speed limits and accelerating uptake of speed limiting technology and behaviour change initiatives including Junior Roadwatch, where children stop speeding motorists outside schools. However, much more needs to be done.

Stuart Reid, TfL’s Director of Vision Zero said: “Reducing the number of people dying or being seriously injured on our transport network to zero by 2041 is an ambitious target. However when you think about the people who make up these numbers – someone’s father, daughter, sister, husband or child – how can we strive to achieve anything other than zero?

“Too many lives and communities in London are blighted by road trauma. We must see this for the issue it is and do everything we can to prevent this devastation from happening. So much work has gone into Vision Zero already this year, but we all have so much more to do and we won’t stop until we achieve Vision Zero.”

“We wholly endorse the Mayor’s Vision Zero Action Plan and are actively working to ensure that the borough’s roads can become safer for everyone, especially pedestrians and cyclists.

“We encourage our residents to walk or cycle in the borough to help them lead a healthier lifestyle and also to cut down on traffic congestion and emissions,  responsible for up to 50% of London’s air pollution.  It stands to reason that if we want people to choose sustainable modes of travel, we must make our roads safer.”

While the number of people dying on our roads is down, those seriously injured is up from 3,750 in 2017 to 3954 in 2018. A disproportionate number of people walking (49 per cent), and riding motorcycles (20 per cent), are among those killed and TfL, the Met and City of London Police are focusing efforts on making the roads safer for these groups. Official collision statistics for London will be released on Thursday 25 July, in line with the publication of national statistics by the Department for Transport.

The ‘Know My Name’ campaign helps people understand that each statistic has a story. TfL will share the experiences of people whose lives have been devastated by road trauma and encourages the public to independently share their experiences on social media using #KnowMyName.

The five Vision Zero advocate stories captured on video include:

Vision Zero Week will also highlight the work underway by TfL, the Met and City of London Police to achieve Vision Zero, as well as the commitment of many other delivery partners, including London’s boroughs, campaign groups, bus operators and industry groups.