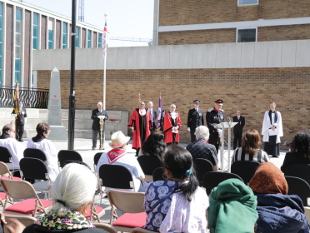 As the main national Armed Forces Day (Saturday 29 June) event this year was to be held in Salisbury, Wiltshire, it was decided to mark the day in Hounslow on Friday 28 June instead.

The event began with a parade of Armed Forces veterans and representatives from the Royal British Legion, including standard bearers, followed by a special service outside the Holy Trinity Church, in High Street, Hounslow led by the Reverend Stu Wright.

The service commemorated the sacrifices that serving men and women of the armed forces make on a daily basis, and the Armed Forces Day flag was also raised.

The Rev Stu Wright led prayers and gave a blessing at the end of the event. The Deputy Lieutenant and the Mayor of Hounslow also gave short speeches reflecting on the Armed Forces and expressing pride in them and their service to the country.

Speaking at the event, the Mayor of Hounslow, Cllr Tony Louki, said: “Today is an important day. It not only recognises that we are very fortunate to have so many veterans and cadet forces in our borough, it reminds us that their work is vital to the security of this country.

“As Mayor, I am honoured to be standing here today with them, and we should all be very proud of the service men and women that protect our freedom.  But pride isn’t enough. We must remember that the forces and their families continually facing challenges and need our support – serving personnel and their families do not always get a good deal in terms of accommodation and care whilst serving, but in many cases, limited appreciation of their wellbeing, mental health and housing needs afterwards, too.

“On behalf of Hounslow, I will endeavour to continue raising the awareness of their courage and good work, and I will do all that I possibly can to make sure they are recognised in our borough.”