Hounslow successful in bidding for Heritage of London Trust grant 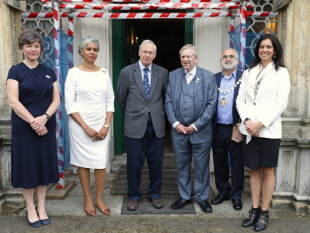 Boston Manor House was the star of the show as Royal Patron for Heritage of London Trust, HRH The Duke of Gloucester visited Hounslow. His Royal Highness was greeted by the Mayor of Hounslow, Cllr Tony Louki, Blondel Cluff CBE of The National Lottery Heritage Fund, Emily Gee of Historic England, local ward councillor for Brentford, Cllr Melvin Collins, local historian Janet McNamara and a group of expert conservation specialists before embarking on a guided tour around the historic house. HRH The Duke of Gloucester was also shown images of Queen Elizabeth, the Queen Mother, when her Majesty re-opened Boston Manor House in 1963.

The visit comes after Hounslow Council was successful in gaining a grant worth £9,300 from Heritage of London Trust to restore and conserve a rare eighteenth century wallpaper in Boston Manor House.  This rare wallpaper depicting classical ruins, inspired by the cult of the Grand Tour, was believed to have been hung in the 1750’s for James Clitherow III’s marriage to Ann Kemeys.

Conservation and restoration of the 18th century wallpaper will be undertaken by a specialist wallpaper conservator; new protection measures and an innovative interpretation will be put in place to explain its significance.

“We were delighted to bring our Royal Patron, HRH The Duke of Gloucester, to visit Boston Manor House – last visited by The Queen Mother in 1963!

The restoration project is one of the most exciting in London and the house will have so much to offer when it reopens – from 17th century interiors to rare 18th century wallpaper & new public spaces. We’re very pleased to be involved”

“It is such a pleasure when there is an alignment of enthusiasm, expertise and a great subject to focus upon.

"Boston Manor House is a London Borough of Hounslow gem, and all have promised to return when this phase of restoration is complete in 2021.”

Boston Manor House is currently closed to visitors ready to undergo conservation and restoration made possible with funding through The National Lottery funding distributed through The National Lottery Heritage Fund, London Borough of Hounslow, The Mayor of London’s Good Growth Fund, Historic England, The Wolfson Foundation, The Pilgrim Trust and The John and Ruth Howard Trust.