Councillor Tony Louki, ward member for Osterley & Spring Grove, has been elected Mayor of Hounslow for the municipal year 2019/20. 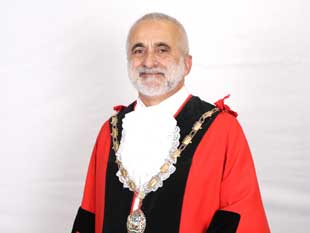 Councillor Raghwinder Siddhu, ward member for Bedfont, is the new Deputy Mayor. Cllr Siddhu is one of Hounslow’s newly elected members, joining the council in 2018, and is looking forward to taking up his ceremonial role of Deputy Mayor in Hounslow, and supporting Cllr Louki over the coming year.

The appointments were made at the annual meeting of the council last night (Tuesday 21 May).

Speaking after his election to the office of Mayor for the next 12 months, Cllr Louki said:

“It is an honour and a privilege to accept this role, and I will fulfil my responsibilities as Mayor with the energy, enthusiasm and commitment the position demands.

“I will commit to supporting and representing the whole of the Borough, all parts, all bits, all postcodes, all people, all institutions, all schools, clubs, societies and associations.”

“I shall also, bar the odd barbeque, do my very best to be carbon minimal: public transport, electric or hybrid pool car and, unless circumstances prevent, minimal Mayoral limo use.”

Due to celebrate his own 60th birthday this year, the Mayor has chosen Hounslow Seniors Trust (registered charity number 1148061) as the first of his two charities for the year. The Trust works with a wide range of partners including older people themselves to organise Hounslow Older People’s Festival, as well as creating an opportunity for older people to get together, enjoy a range of activities and events taking place across Hounslow, learn new things and make new friends.

The second of the Mayor’s charities for the year is Our Barn Community (registered charity number 1181421) which runs community-based activities providing learning, life skills and social interaction for young people aged between 16 to 35 with learning disabilities or autism. Cllr Louki will be specifically fundraising to get more adapted cycles for the charity’s Buddy Bicycles scheme located in the grounds of Osterley Park, which allows people of all abilities to experience and enjoy cycling.

As well as the election of the Mayor for 2019-20, the Leader of the Council, Cllr Steve Curran, announced one change to the Cabinet at the meeting. Cllr Sue Sampson stepped down, and Cllr Samia Chaudhary was appointed Cabinet Member for Leisure Services.  The full Cabinet for 2019-20 is:

There is also a new Leader of Hounslow’s Conservative group: Councillor Joanna Biddolph, and Cllr Patrick Barr is her Deputy Leader.

Full membership and appointment details for all Committees and Boards are also available on the website.