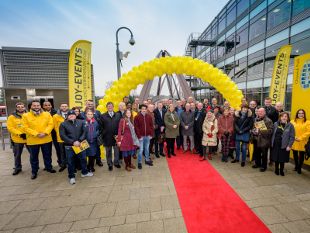 The new bridge will significantly reduce journey times for pedestrians between the Business Park and the tube station and has already helped reduce some of the pressure on Gunnersbury Station which can get very crowded at peak times.

The bridge is the culmination of several years partnership working between the council, Transport for London (TfL), Network Rail and Blackstone (the developer of the park).  The council stepped in back in 2015 when this project stalled and removed barriers to works starting to get it up and running as soon as possible. The bridge now forms part of the council's highway asset.

Cllr Steve Curran, Leader of Hounslow Council, formally opened the bridge on Thursday 24 January, said: "This is a great addition to the park, but is also set to be an essential community asset - improving access between Chiswick Park and Gunnersbury stations for pedestrians. Our manifesto made clear we wanted to deal with issues at Gunnersbury station, and diverting some of the demand to other nearby stations forms an important part of that process. I would like to thank all of the parties involved for sticking with it; it may have taken a long time but it’s been worth it and a good example of the private and public sectors working together for a common goal”