This year’s “Make Your Mark” campaign has seen 1,106,788 young people across the country take part, making it one of the largest youth consultations of its kind in UK history. 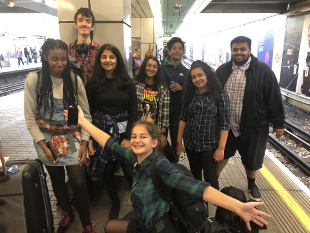 This year’s “Make Your Mark” campaign has seen 1,106,788 young people across the country take part, making it one of the largest youth consultations of its kind in UK history, with one in five of all young people aged 11-18 taking part.

Eleven-18 year olds vote on which topic is most important to them, with five going forward to be debated in the House of Commons

For the sixth year running, the Hounslow Youth Council have managed to better their result from the year before, managing a whopping record breaking 14,283 votes, equivalent to a turnout of more than 75 per cent of 11–18-year-olds in the borough.

Councillor Tom Bruce, Cabinet Member for Education, Children and Youth Services, Hounslow Council, said: “Young people in Hounslow have worked incredibly hard to collect votes in the borough’s schools, colleges, libraries and youth groups this year and have been rewarded by finishing with the third highest turnout across the entire UK.

“This incredible result is an indicator of the excellent work the Youth Council do in Hounslow as well as the level of interest and engagement in social issues amongst the young people of our borough.”

For Ciya Vyas, a student from Lampton School, Hounslow’s Member of Youth Parliament for 2018-19, this was an extra special result as her motion to “Put an End to Knife Crime” topped the ballot both here in Hounslow and across the country and stands an excellent chance of being the UK Youth Parliament’s national campaign next year.

Ciya said: “I’d like to thank all the young people who helped achieve this result and everyone who voted.

“By treating youth violence as a disease, we are tackling the root of the issue, rather than mopping up the people who have fallen victim to it. The public health approach is an all-encompassing solution that utilises all our services and is the best way forward to help tackle youth violence”.

The five issues that have been prioritised are:

Put an end to Knife crime – Too many young people’s lives are lost to knife crime; the Government need to do more to help end the knife crime epidemic

Mental Health – Mental health services should be improved with young people’s help; and should be available in schools

Equal Pay, Equal Work – Give young people the same amount of pay, if they are doing the same work as adults in the same job

Tackling Homelessness – Every person should have a place to live and the opportunity to live comfortably. Let’s make it happen and put a stop to homelessness

Votes at 16 – Give 16 and 17 year olds the right to vote in all elections/referendums.