Hounslow at Pride in London

The London Borough of Hounslow took part in the Pride in London Parade on Saturday 7 July for the first time. 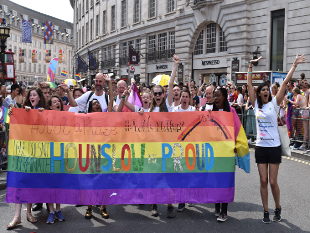 The Hounslow group was made up of; staff, residents and young people from Hounslow Youth Council and included councillor representation from Cllr Eason, Councillor for Osterley and Spring Grove Ward. Many of the group had faced adversity because of their sexuality and the council wanted to demonstrate its support for Hounslow’s LGBT+ community and its zero tolerance towards hate crime. The annual event, paraded through the heart of central London raising awareness of LBGT+ rights, freedoms and diversity.

For the first time in Hounslow’s history, there were a limited number of parade places for residents to be at the heart of the action. The Rainbow Boroughs entry to the Pride march brought together representatives from across London who would otherwise not be represented at Pride in London. The group received cheers from the crowd (some of whom were LBH residents) and got shout outs at all the different stages along the parade route.

The Rainbow Boroughs Project was established by the 17-24-30 No To Hate Crime Campaign (named after the combined dates of the London nail bomb attacks on Brixton, Brick Lane and Soho which took place on the 17, 24 and 30 April 1999), which tackles hate crime in all its forms.

Those representing Hounslow had the opportunity to shape the borough’s entry with their representation of what Pride meant to them.

“Hounslow’s diverse community sees people live side-by-side and get on well together. We have zero-tolerance towards hate crime and have a dedicated hate crime advocate.“The borough’s participation alongside other London boroughs, is an important act of solidarity, standing up to prejudice and intolerance in all its forms. Hounslow put itself at the heart of Pride in celebration of the diversity of our communities."

"Participating in Pride as part of Rainbow Boroughs has been one of the highlights of my year. The support we got from the crowds and the other paraders was overwhelming-the enthusiastic response from girls our age was particularly touching. I hope they were inspired by seeing people who looked like them in the parade!"

Hounslow Council's Hate Crime Advocacy service is open to anyone that has experienced hostile acts in the borough because of their race, religion, disability, gender identity or sexuality.