A hotspot for anti-social behaviour in the centre of Hounslow has been improved after police carried out a series of raids to catch those responsible following concerns raised by residents and police. 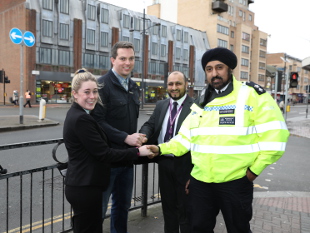 A hotspot for anti-social behaviour in the centre of Hounslow has been improved after police carried out a series of raids to catch those responsible following concerns raised by residents and police action requested by Hounslow Council officers.

Residents had made complaints about the anti-social behaviour taking place on School Road, High Street and Inwood Park in Hounslow and the Council’s enforcement officers raised the alarm with police and local Councillors.

Hounslow Police’s Crime Squad carried out a series of raids and made 23 arrests – including 22 men and one woman – on 23 February as part of the long running operation to clean up the area. Class A drugs, Class B drugs and cash were seized as drug dealers were targeted along with associated offending such as knife crime, other violence, burglary, theft and anti-social behaviour.

“I’d like to say a huge thank you to Hounslow police for their outstanding work in making these successful arrests. Their perseverance in this long running operation needs to be recognised and commended as it has brought relief from criminality to those people in the area.”

"Today's operation is indicative of our commitment to keep Hounslow safe, and listen to and act on community concerns. We will continue to disrupt and dismantle crime, safeguard our community and locate and prosecute those people who inflict misery on them.

"By targeting drug dealing we can continue to have a positive and long term impact on related crimes such as knife crime, violent and acquisitive crime and on the quality of life of our communities.

"The support of our community is essential to achieve positive change and I would like to thank those in our community for providing that ongoing support to us. I hope they can see that our actions, in conjunction with the Local Authority, show we do act on their concerns."