Hounslow Council has agreed a planning application for the regeneration of Dukes Meadows during a public meeting held yesterday (Thursday 8 February). 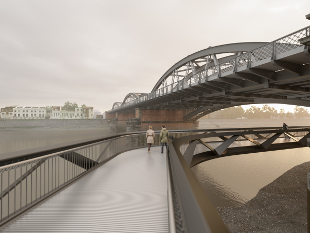 Hounslow Council has agreed a planning application for the regeneration of Dukes Meadows during a public meeting held yesterday (Thursday 8 February).

The approved plans incorporate improvements to the public space and upgrades to sporting facilities on the site which include:

The plans are supported by the London Wildlife Trust (LWT) and national sporting governing bodies including the County Football Association (County FA), the Rugby Football Union (RFU) and British Rowing, in addition to all local clubs including Old Meadonians Football Club, Chiswick Rugby Club, and Hounslow and Barnes Hockey Clubs.

Other organisations which have contributed to the plans include the Port of London Authority and the charity Sustrans, which promotes sustainable travel.

The first stage of the improvements, which start on Monday 12 February, will involve the installation of bat boxes to support biodiversity, as well as maintenance to improve views along the Thames. Following this, works will begin to build a new artificial rugby pitch.

Councillor Steve Curran, Leader of Hounslow Council said:
“I am pleased that this project has received the recognition and support it merits and I’m delighted that the journey with the community so far has been overwhelmingly positive. The proposed plans have worked as a catalyst to inject funding into Dukes Meadows and has brought local clubs and stakeholders together to work more collaboratively.

The council is committed to improving the great asset that is Dukes Meadows and we will continue to work alongside residents and stakeholders as the improvements take shape. We’re grateful to the RFU who have contributed £1.5million which will ensure that works can begin without delay.”
A proposed footbridge, which will allow greater access along the Thames path, is an important component of the approved plans and the planning application for its construction was also approved at the public meeting

The London Wildlife Trust is collaborating with designers to develop a planting and management strategy to ensure all proposals are ecologically sensitive.

Consultation with the community revealed that the main concerns for the site were in relation to traffic. The council has listened to those concerns and in response has put together plans to mitigate increases in traffic through improvements to road infrastructure and parking.