Eliminating violence towards women and girls was the focus for the White Ribbon 16-days of action last month [25 November – 10 December]. 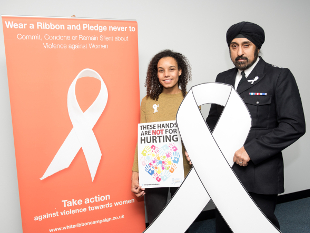 The White Ribbon Campaign was set up over a decade ago by a group of men who wanted to send out a message collectively that there is never an excuse for violence against women.

Two years ago [2015], Hounslow officially became a White Ribbon Town and as result, has been one of the leading local authorities in the fight to end violence against women and girls.

The award from the White Ribbon Campaign gave Hounslow status and recognises the pledge it has made to mobilise the entire local community under the goal of ending violence against women and girls.

As part of the 16-days of action, the Council supported a number of projects and initiatives that were taking place.

This included supporting Brentford FC’s match of action at Griffin Park, where fans wore White Ribbons and took the White Ribbon pledge “never to commit condone or remain silent about violence towards women and girls”.

There were stalls at West Middlesex Hospital, Twickenham Road, Isleworth where people could learn about domestic abuse, sexual violence and female genital mutilation and how to access support locally.

The Mayor, Councillor Sue Sampson and Chief Superintendent Kohli hosted the Hounslow’s 3rd Annual White Ribbon Awards where individuals from the health service, police, schools, charity sector and council where celebrated for their dedication to eliminating violence against women and girls.

A White Ribbon, 120m long was painted in Lampton Park by the Carillion Integrated Services’ Hounslow Parks Team, the ribbon was right under the flight path, marking Hounslow’s commitment to ending gender based violence.

The next step for Hounslow is to apply for White Ribbon Town re-accreditation and work is underway to create an action plan in the New Year.

Cllr Atterton said: “Here at Hounslow Council, we are committed to ending violence against women and girls.

“We will continue to encourage everyone to take the White Ribbon pledge, of never to excuse, commit or remain silent about it.

“The Council will continue to be at the forefront of the fight against domestic violence, female genital mutilation and the sexual exploitation of women and girls in Hounslow and beyond.

“We want to say a big thank you to all those, especially the men, who have had made a significant contribution to our pledge. We now hope many more will join us in taking our commitment further.”

For details on how a pledge can be made, visit https://www.whiteribbon.org.uk/pledge

Chief Superintendent Kohli, said: “Any form of violence is unacceptable but violence against women and girls is more sinister.

“For too long men appear to have been silent on the matter – no more.  The principles of the White Ribbon campaign are entirely right and as men, we must practice tolerance, respect and kindness and to stand up to inappropriate behaviour at all times.”

If you’re experiencing domestic violence and living in Hounslow please contact the Hounslow Domestic and Sexual Violence Outreach Service on 020 8247 6163 or you can attend the One Stop Shop at Route 36, 36 Bath Road, Hounslow TW3 3FF on Wednesdays between 10am – 12pm.