Hounslow comes together to remember 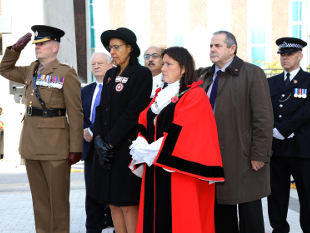 The Mayor of Hounslow, Councillor Sue Sampson was joined by Maria Pedro, The Queen’s Representative, Deputy Lieutenant for Hounslow, Capt. Edward Pickersgill with the Irish Guards, veterans and pupils from Cranford Primary School.

The service was led by the Reverend Richard Frank, Area Dean of Hounslow.

Also playing their part in the service was The Royal British Legion, cadet forces, Ruth Cadbury, MP for Brentford and Isleworth and a representative attended on behalf of Seema Malhotra, MP for Feltham and Heston.

Wreaths of poppies were laid by the representatives and the school children placed small wooden crosses with poppies attached, around the war memorial outside the church.

Armistice Day which traditionally falls on the 11th day of the 11th month, is on a Saturday this year, so the Council’s service has taken place on the day before.

The service included two minutes’ silence, hymns, readings and prayers to reflect the lives lost in war time before the Last Post was sounded.

Services for Remembrance Sunday, will be taking place this Sunday, 12 November across the borough – visit www.hounslow.gov.uk

Cllr Sampson said: “This service gave us and our borough the chance to stop and reflect on those who have given their lives for our country and countries across the world.

“At the service, I read out The Kohima Epitaph, which says When you go home, tell them of us and say: For your tomorrow, we gave our today.

“I think this sums up what sacrifices our brave men and women of our armed forces have made and still make today.

“Thank you to all who attended, including the many people who stopped what they were doing, to join us in the town centre. Residents can join us again for Remembrance Sunday, with services taking place across the borough.”