Poppies in bloom as Hounslow gets set to remember

Giant poppies are adorning streets throughout Hounslow as the borough gets set to mark this year’s Armistice Day and Remembrance Sunday. 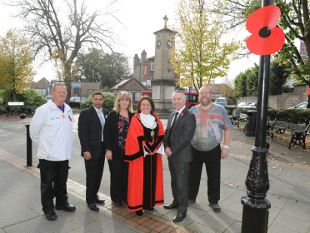 Giant poppies are adorning streets throughout Hounslow as the borough gets set to mark this year’s Armistice Day and Remembrance Sunday.

Councillor Sue Sampson, Mayor of Hounslow saw a fundraising campaign by Feltham resident Mike Foston who with the local community, was looking to raise £3,000 to purchase 1,000 poppies.

With less than three weeks to go before Remembrance Sunday, he had raised just over £600.

Impressed by this initiative and wanting to put the poppies up across the whole borough, the Mayor spoke to Hounslow Highways which agreed to sponsor the poppies at a cost of £4,500, creating a special “poppy path” linking all war memorials in the borough.

A sum of £250 was also donated by Tesco, Dukes Green, Feltham.

The Mayor also worked in partnership with Andre McGill, Chairman of the Hounslow branch of the Royal British Legion, to co-ordinate volunteers to put up the rest of the poppies in the borough.

The aim is for the poppies to be a visual reminder of the sacrifices made by men and women from past and present conflicts.

Councillor Sampson said: “We wanted to make sure that the appreciation of the people of Hounslow to those who gave their lives for us, is marked in this way.

“It has truly been a great example of the community spirit we have in this borough. Everyone has been passionate about getting the poppies up in our high streets for all to see and we made it happen by working together.

“As we get closer to the annual services held every November to remember the brave men and women of our armed forces, it is wonderful to see the poppies as a vibrant reminder of the ultimate sacrifices they made.”