The Mayor of Hounslow let her feet do the walking as she pounded the streets of London in aid of the fight against domestic violence. 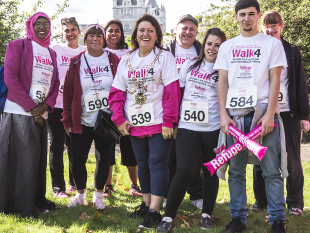 The Mayor of Hounslow let her feet do the walking as she pounded the streets of London in aid of the fight against domestic violence.

Cllr Sampson said: “It was a fantastic event and one I truly enjoyed being part of because it is such an important cause that we must keep working to raise awareness of.

“Domestic violence took the life of my sister 41 years ago when she was only 23 years old. But I was hearing stories from other walkers about how they have lost a loved one and children, friends or someone they know in the same or similar circumstances more recently.

“I can’t believe I am still listening to such horrific events concerning domestic violence. It means it is still going on and it is something we must strive to stop.

“In a lot of the cases I heard the trigger point escalation was when the partner decides to leave, like it was for my sister. It makes me more determined to raise awareness and fund the work that needs to be done in order for us to live in a world free of domestic violence.”