The sky's the limit for Hounslow's Mayor!

The Mayor of Hounslow reached new heights for charity as she made a 10,000 feet freefall parachute jump at Brackley Airfield, Northants on Monday. 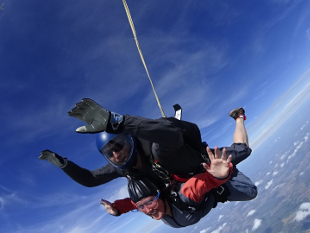 The Mayor of Hounslow reached new heights for charity as she made a 10,000 feet freefall parachute jump at Brackley Airfield, Northants on Monday.

Councillor Sue Sampson took part in the sponsored jump in aid of one of her chosen charities, Pink Ribbon Foundation.

With the summer sunshine behind her, the Mayor rose to her challenge and enjoyed every minute of it.

She said: “It was an exhilarating experience. I was not nervous until I saw my son Liam’s face as he was about to jump!

“It was then a case of what am I doing?! But as I reached the door of the air craft- I thought, well, there’s no going back now and I jumped.

“I am so glad to have done this and yes, I would do it again. You struggle to find a single word that sums up the experience as it is like potentially staring death in the face, but it was something I will never forget.”

So far, the Mayor and her team have raised over £4,000 with donations still flying in. People can still donate, visit goo.gl/HEfd1N

The Mayor added: “Pink Ribbon Foundation- a Breast Cancer Charity is one of my two chosen charities along with Refuge so the funds we raise are so important.

“I want to thank all the staff at Brackley Airfield plus Jim Meehan and Andy Bell of SkyHeld Cameras, my cameramen for the day who filmed the jump. It was a great day and who better to do this for than for charity, the Pink Ribbon Foundation.”

The parachute jump has kick-started what promises to be a busy year of fundraising for the Mayor. Just as her feet have touched the ground again, she will be off on another fundraiser, this time on foot.

Details of how to donate or join the Mayor team on the walk, can be found by visiting https://walk42017.everydayhero.com/uk/mayor-of-hounslow