Hounslow on the move to more success with Beat the Street!

Thousands of people are expected to take to the streets of Hounslow once again this autumn, to see who can walk, run or cycle the furthest for Beat the Street 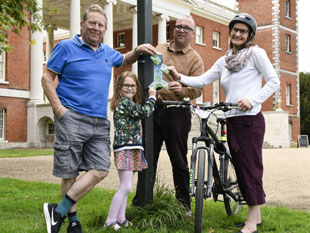 Thousands of people are expected to take to the streets of Hounslow once again this autumn, to see who can walk, run or cycle the furthest for Beat the Street.

Schools, businesses, community groups and residents will all be taking part in the scheme which is funded by Hounslow Council, from Wednesday 20 September to Wednesday 8 November.

It is free to join in and there will be rewards including prizes for those clocking up the most miles across the borough either on foot or on a bicycle.

There will be more than 180 special sensors called ‘Beat Boxes’ which will appear across Hounslow outside local landmarks, in parks and along popular walking and cycle routes.

Those taking part can pick up their own Beat the Street cards and maps from their local libraries https://www.hounslow.gov.uk/info/20050/ libraries and swipe the cards on the boxes to receive points and win prizes.

Beat the Street returns to the borough following a hugely successful game in 2016 which saw around 30,000 residents run, walk and cycle 106,000 miles in just seven weeks.

Schools across Hounslow will be competing against each other once again to see who can travel the furthest and be in with a chance to win sports and fitness equipment.

Adult players are also able to create their own teams or register to join existing teams to be in with a chance to win prizes.

A new addition to the game this year will be a chance to raise monies for a good cause, with a donation made to a local charity if players travel further than in 2016.

The activity-based initiative is run by Intelligent Health on behalf of Hounslow Council and the aim is to encourage thousands of people to explore their borough with their friends and family and discover something new about their area.

Councillor Kamaljit Kaur, Cabinet Member for [Public] Health and Adult Social Care, Hounslow Council, said: “We are all very excited to be bringing Beat the Street back to Hounslow and can’t wait to see how far everyone will walk, run, cycle and scoot during the seven-week challenge this year.

“Anyone can get involved in Beat the Street – it’s completely free to play and it is a great opportunity to go outdoors, spend time with your friends and family and be active at the same time. Watch out for Beat Boxes appearing on a street near you!”