Did you know that batteries or small electrical items thrown in with your waste can burst into flames when they are compacted? Hounslow Council is urging everyone to dispose of them safely. 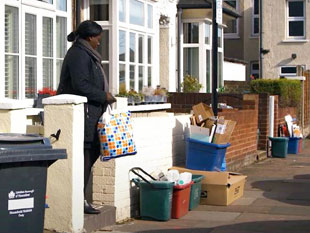 That’s the big message from Hounslow Council as part of a national campaign aimed at preventing dangerous waste fires.

The risk comes when batteries and discarded electrical items containing batteries, are thrown in with general waste. When these items are compacted they can ignite, causing fires in the collection vehicle.

Research conducted by recycling group Material Focus, shows that 90 per cent of councils across the country have reported that battery fires are a growing problem. The group’s findings show that more than 600 fires in bin lorries and at household waste disposal sites have been caused by hidden batteries. Their research also showed that 45 per cent of householders are unaware of the fire risk if they don’t safely dispose of batteries, with a quarter of householders unsafely throwing them away.

Material Focus has launched a national ‘Stop Battery Fires Campaign’ to raise awareness of how householders can recycle their batteries and electricals and the potentially deadly consequences of binning electrical or batteries incorrectly.

The campaign message is clear:

Electrical items containing batteries that tend to be discarded the most are smaller, frequently used and often cheaper electricals like toothbrushes, shavers, chargers, and toys.

Scott Butler, who is the Executive Director of Material Focus said: “Having listened to the numerous stories of flames engulfing waste and recycling trucks as they drive down residential streets, it’s important that we all take action now to keep our streets, householders, waste and local authority staff, and fire fighters safe. People can find their nearest recycling point for batteries and electricals by visiting our recycle your electricals website.”

In Hounslow, there have been several near misses with discarded batteries. One such incident took place on April 29, last year when the member of a collection crew noticed smoke coming from the back of the lorry.

“I was collecting plastic bottles and cans, but you cannot see what is at the bottom of the container,” the collector said. “The battery must have been hidden in the rest of the material. I turned on the lift which takes recycling to the top compartment to the back of the lorry. When I opened the doors, I saw smoke and fire. It was coming from a drill battery.”

The quick-thinking worker managed to tackle the burning battery with a powder extinguisher. Left unchecked, they believe the entire lorry would have been engulfed by flames.

The worker added: “We do find batteries in with the mixed recycling on some occasions and we have to take them out before they go into the lorry to prevent this kind of thing from happening. Anything we can do to inform residents about the dangers these batteries pose and ask them not to throw them in with the other recycling would really help.”

Hounslow Council can collect small electrical items as part of the weekly kerbside collection. These items need to be in a clearly marked plastic bag and left with your recycling boxes.

You can also find out where to recycle your electricals through the Material Focus website.

Hounslow Council’s Deputy Leader and Cabinet Member for Climate, Environment and Transport Strategy, Councillor Katherine Dunne said: “Fires involving batteries can be very damaging and difficult to put out. As we heard, they pose a potential risk to our workers and are bad for the environment”.

“Please dispose of your batteries responsibly and don’t just throw them in with your household waste and recycling. Most supermarkets, DIY shops or anywhere that sells batteries have battery recycling points. You can also recycle them at our Space Waye Recycling Centre in Feltham.”

“There really is no excuse for binning your batteries or electricals. Let’s keep them out of the general waste and recycle for Hounslow.”