UEFA Women’s EURO 2022 has taken over London welcome signs as the capital gets ready to welcome stars from Denmark, Germany, Spain as well as the finalists heading to Wembley on 31 July. 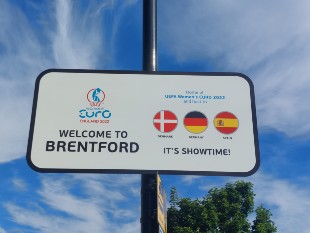 The tournament is expected to be the biggest women’s sporting event in European history, with many of the world’s greatest female footballers taking part.

London will play host to five games, throughout July, including a quarter-final tie and the final at Wembley Stadium.

With over 450,000 tickets sold, even before a ball is kicked, this year’s event has already surpassed the previous tournament record of 240,045 set in the Netherlands (2017).

Ahead of the opening match at Brentford Community Stadium on 8 July, fans are encouraged to welcome and embrace all the teams arriving into the region.

Hounslow Council’s Cabinet Member for Parking, Parks and Leisure Services, Councillor Salman Shaheen, said: “I am proud that London will be a host city for the UEFA Women’s EURO 2022 and it is so inspiring to see the new signage, showcasing Hounslow’s central role in the tournament.  Football fever has definitely started and the entire borough is eagerly anticipating the first game. We warmly welcome everyone that will visit us over the coming weeks.”

The FA’s Head of Tournament Delivery, Chris Bryant said: “We’re delighted to be able to officially welcome the UEFA Women’s EURO 2022 teams to England. We have an exciting few weeks ahead and a fantastic opportunity for football fans to experience some of the world’s very best players on their doorstep. As we look ahead to the opening match, excitement across the country is growing at an incredible rate. Anyone who hasn’t got a ticket still has a chance to get involved and show their support for what is already a huge history-making moment for women’s football.”

During the tournament, fans in London can watch some of the best players in the world, including 2020/21 UEFA Women’s Player of the Year Alexia Putellas of Spain, who will feature against the team with the most tournament wins under their belt, Germany at Brentford Community Stadium.

UEFA Women’s EURO England 2022 brings the tournament back to England for the first time since 2005. Tickets are still available for fans to experience a record-breaking tournament that aims to unite football and communities and amplify the growth of the women’s game.

Prices start at £10 for adults and £5 for under 16s. Visit www.uefa.com/womenseuro/ticketing