The Queen's Platinum Jubilee Celebrations were a huge success in Hounslow. Communities across the borough joined together to celebrate Her Majesty's 70-year reign. 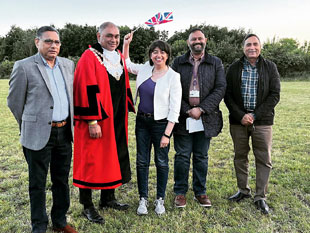 They came, they saw, they celebrated…

Communities across Hounslow have joined together for a series of right royal celebrations over the Queen’s Platinum Jubilee weekend.

During the four days of festivities, the borough was alive with street parties, play streets for the children to enjoy and a host of events and activities in Hounslow’s parks and green spaces.

Highlights of the borough’s celebrations included a special ‘Beacons at Bedfont’ - which saw beacons lit at Bedfont Lakes on Thursday, 2 June, to commemorate the Queen’s 70 years on the throne. Leader of Hounslow Council, Councillor Shantanu Rajawat was among those attending this event. 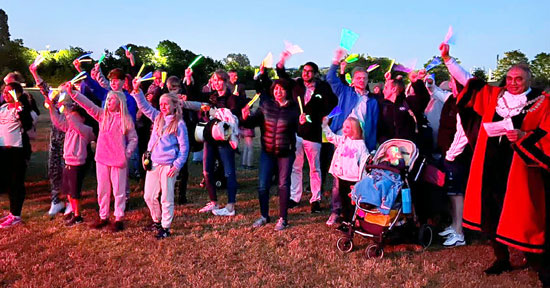 Image of the Mayor of Hounslow Raghwinder Siddhu, with Hounslow residents at the Beacons at Bedfont which saw beacons lit at Bedfont Lakes on Thursday 2 June for the Queen's 70th Jubilee celebrations.

Other activities at Bedfont Lakes included lantern-making, an outdoor movie screening, a funfair and self-led trails through the great outdoors.

Three further park events were held at Isleworth Green, Bedfont Green and St Paul’s Recreation Ground. Over at Boston Manor Park, visitors are being offered a selfie moment next to the borough’s royal crown, carved from oak.

Tree planting is also a major theme for the Jubilee celebrations. The borough is supporting the Queens Green Canopy project, which encourages people to ‘Plant a tree for the Jubilee’ and register it on a website. More than 430 trees have been registered in Hounslow so far.

A total of 77 street parties took place, including 12 play streets for children. More than £50,000 of grant funding has been allocated to 58 groups. The events staged have been enjoyed by thousands of people.

Council Leader, Cllr Rajawat, said: “Her Majesty the Queen continues to be an inspiration to us all. Her 70 years of tireless, unstinting devotion to our nation is miraculous and thoroughly deserving of the national outpouring of admiration and gratitude we have seen during the celebrations.”

“The London Borough of Hounslow holds the Queen’s role and contribution to our nation in deep affection. Over the celebratory weekend, our communities and residents have shown exactly this. They have done our borough and our nation proud.”

And it doesn’t end there. The bunting and fun of the Jubilee celebrations mark the start of the Council’s Summer of Culture extravaganza. This summer-long celebration of the borough brings together the best in performance, culture, sports and the arts.

It is a celebration of the spirit of Hounslow, its people, places and the rich diversity of its communities.