The team at the historic Brentford park has been busy encouraging greater biodiversity at the site by providing purpose-built homes for all sorts of woodland creatures. 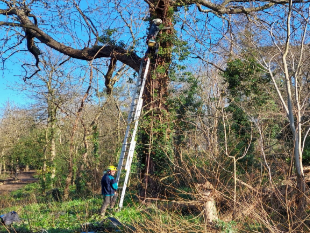 Do you know your Pipistrelle from your Noctule?

They’re both types of the small flying mammal that is a firm favourite in scary movies and the odd superhero story.

And if you’re planning on visiting Boston Manor Park, you may be in with a chance of seeing some Great British bats first-hand.

The team at the historic Brentford park has been busy encouraging greater biodiversity at the site by providing purpose-built homes for all sorts of woodland creatures.

The latest addition is 33 new bird and bat boxes, which have been made by volunteers from the Friends of Boston Manor Park.

These fascinating creatures often make their homes in woodlands, around lakes and rivers. Some species are no bigger than a matchbox and feed on flying insects. The best time to go bat-spotting is in the summer months at sunset or sunrise.

Bats aren’t the only creatures being encouraged to make their home at Boston Manor. Volunteers have created a circular dead hedge around one of the veteran oaks in the meadow. It will create important habitats for insects, birds, amphibians and hedgehogs.

On top of this, more than 160 trees are being planted as part of the Reconnecting Boston Manor Park project, which will also provide a haven for wildlife.

There are plenty of wildlife events taking place at the park, including a Spring Nature Walk on Thursday, 14 April, from 10am and guided bat walks at dusk where you can use detectors to spot and identify the bats in the park – dates to be confirmed.

You can sign up to hear about these and upcoming event and activities in the park by emailing: bostonmanorpark@hounslow.gov.uk