Plans revealed for the future of Boston Manor Park footbridge

A wooden footbridge at Brentford’s Boston Manor Park that closed due to safety concerns will be replaced later this year. 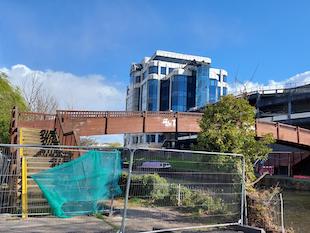 The bridge, which crosses the Grand Union Canal into the park from Transport Avenue, had to be closed last year following an inspection.

Inspectors found that the bridge was showing signs of rot and had become unsteady, making it unsafe for public use.

Since the closure, officers from Hounslow Council have been working with partners from Hounslow Highways and the Canal and River Trust on the way forward for the water crossing. Now, designs have been proposed for a replacement span of the bridge.

A new metal span is planned which will be flatter than the wooden one. This will join the existing steps, which will also be repaired and will be in place later this year.

The Council would like to thank its partners within the community along with all park users for their continued patience and will continue to keep everyone updated on the progress of the new bridge as plans develop.