London is one of the nine UEFA Women’s EURO 2022 host cities is taking part in a National Lottery funded project to uncover the hidden history of women’s football. 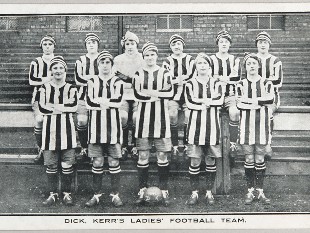 London is one of the nine UEFA Women’s EURO 2022 host cities is taking part in a National Lottery funded project to uncover the hidden history of women’s football in a summer of celebration of the game, its players and communities.

In partnership with The FA, Gunnersbury Park Museum (on behalf of Hounslow and Ealing councils) has joined a number of other organisations across England for the project which has been awarded £500,000 by The National Lottery Heritage Fund.

It’s an important year for women’s football, as England hosts the UEFA Women’s EURO and the Lionesses mark their 50th anniversary. However, the history of the game goes back a lot further and this year also marks 141 years since women’s football was first played professionally.

The National Lottery funded project aims to challenge the common perception of women’s football being ‘new’ and change the nation’s understanding of ‘the English game’. In addition to the National Lottery funding, The FA and host cities have contributed nearly £600,000 to the project, making a total of £1,060,580.

For the very first time, information about every England player, captain, goal scorer and match score since 1972 will be researched, recorded and shared alongside the information that already exists about men’s football. Hosted on England Football’s website the record will continue to be updated, ensuring future female players are part of the nation’s footballing story. The project will particularly explore the role of the LGBTQ+ community.

London is one of nine UEFA Women’s EURO 2022 host cities, taking part in a fantastic range of community events and celebrations this summer.

Hounslow and Ealing have a rich history of women’s and girls’ football activity from Brentford Football Club to grassroots football teams, not to mention the birthplace of Bend It Like Beckham!

“This is exciting news and we’re really pleased to welcome the exhibition to our borough.  Celebrating the history of women’s football has never been more important and relevant, and I hope it will inspire many more women and girls to get involved, and remind them that women have always been an important part of the beautiful game.  Thanks to the National Lottery Heritage Fund there will be yet another reason to visit and enjoy our brilliant Gunnersbury Park.  We want these events to be inclusive and available to all diverse backgrounds and faith groups. We hope to encourage a greater participation in football and the many fitness benefits it brings, and develop our archives for the future.”