Marking Remembrance Sunday across the borough

On Remembrance Sunday members of Hounslow Council will be attending Services of Remembrance 2021, organised by the borough’s Royal British Legion branches. 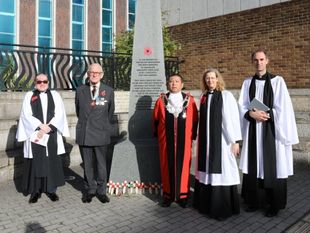 On Remembrance Sunday (14 November 2021), members of Hounslow Council will be attending Services of Remembrance, organised by the borough’s Royal British Legion branches.

The Mayor and Deputy Lieutenant will be attending two events (in Feltham and Hounslow), with fellow councillors representing the Mayor and the Council at the remaining services.

Residents are welcome to attend the Services and watch the parades taking place at the sites.

"It is a great honour to be leading the remembrance services as Mayor on behalf of the Council this year. As a veteran, Remembrance Sunday is very close to my heart. I understand a soldier's life - I have been there. This is a time for us to reflect on the brave sacrifices of our Armed Forces, including the Gurka, and think about what we can do to support them and their families today.

“I’m pleased that we are once again able to gather in-person with veterans and residents to pay tribute to the sacrifices of our brave servicemen and women made during the two World Wars and later conflicts. I hope you will join us in marking this occasion even if you can’t make it to one of the services. Please wear the Royal British Legion’s poppy with pride."

“I want to thank our committed local Royal British Legion branches for everything they do, without their dedication and effort all year round these services would not be possible.”

Services also took place across the borough on Wednesday 11 November 2021, Armistice Day, which commemorates the eleventh hour of the eleventh day, of the eleventh month of 1918 when peace terms were signed ending the Great War in 1918.