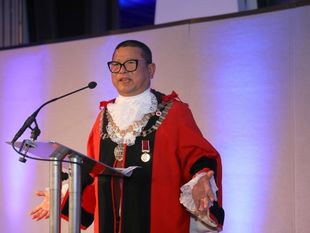 The formal celebration held each year, offers the acting Mayor the opportunity to launch their charitable appeal. This year, Mayor Gurung’s chosen charity is SSAFA (Soldiers, Sailors, Airmen & Families Association). The inaugural event was a great success raising £2,962.50. During the year, the Mayor will also organise a range of community events to raise money for the appeal.

Speaking at the event the Mayor of Hounslow, Cllr Bishnu Gurung said:

“I am delighted to call Hounslow my home, and to be elected as Mayor for our wonderful borough fills me with enormous pride. I am also delighted to be the first Mayor who is Nepalese and a former member of the armed forces.

“I have selected SSAFA as my chosen charity for this year, it has a special place in my heart, as a former British Gurkha Staff Sergeant. The Armed Forces charity provides servicemen and women, veterans and military families with critical, face-to-face guidance and support.

“The local branch in our borough, the London North West division, distributed over £41,000 to local beneficiaries and helped over 40 local families in Hounslow in 2020 alone, despite the challenges of the pandemic.

“I hope that this year we can raise even more vital funds to support SSAFA’s fantastic work across Hounslow and the UK.”

The Mayor of Hounslow plays an important civic role, supporting the borough’s local community groups, voluntary organisations, and residents. The Mayor’s role is pivotal in connecting the Council with local communities, helping to celebrate and recognise the fantastic work taking place across borough.

Mayor Gurung, the first ever Nepalese Mayor of Hounslow, was first elected to the Council in 2014, serving Hanworth Park ward. The Mayor is an ex-British Gurkha Staff Sergeant, during his time in the Army was stationed at various parts in the UK, as well as Hong Kong, Brunei, and Singapore. He retired from the armed forces in 1995, after completing 19 years’ service and received the prestigious Long Service and Good Conduct accolade for his outstanding work upon retirement. In 2005 he settled in Hounslow, and now works full-time as a local bus driver for Transport for London.

Mayor Gurung is heavily involved in various charitable and local organisations. He is a divisional secretary and caseworker for SSAFA, the armed forces charity and serves as trustee and advisor to the Dewachan Buddhist Centre. He was also the founding Chairman of the Gurkha Nepalese Community Hounslow.

If you would like to invite the Mayor to an event complete the online form on our website or get in touch by email on mayor@hounslow.gov.uk or call 020 8583 2243.

For more information on the Mayor’s charity SSAFA visit www.ssafa.org.uk and to donate visit the Mayor’s Just Giving page.