Three criminal landlords have paid over £350,000 in fines imposed by the Courts after they were prosecuted by Hounslow Council for having ‘beds in sheds’ and have been found guilty at Isleworth Court. 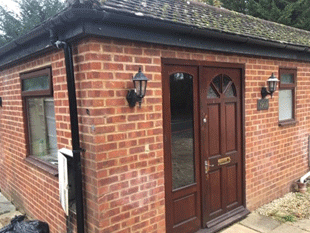 Three criminal landlords have paid over £350,000 in fines imposed by the Courts after they were prosecuted by Hounslow Council for having ‘beds in sheds’ and have been found guilty at Isleworth Crown Court on Friday 15 October.

Brian Linskey and Catherine Hallahan were fined £265,000 after constructing three outbuildings to the rear of their properties in Whitton Dene, Hounslow. Planning Enforcement Officers visited the properties with the support of the LBH Police Team where they found three people living in in appalling conditions when they visited in 2019.

After being warned by Officers, Linskey and Hallahan ignored attempts to regularise the situation and continued to rent out these substandard and illegal properties.

Their refusal to cooperate led to them pleading guilty of the offences and it was determined by the Court that they had earned in excess of £225,469.04 by renting out the outbuildings. All this money will now return to the public purse via the Proceeds of Crime Act.

Another criminal landlord, Muhammad Efzal of East London was prosecuted and fined £72,495.89 and the case heard on the same day at Isleworth Crown Court after he was found guilty of renting out ‘beds in shed’ in a property which he purchased at auction, on Wood Lane, Osterley. Efzal purchased the property knowing the unit could not be legally occupied. However, despite Officers warnings he continued to rent out the property. When officers inspected the property in November 2019 it was found to be occupied by six students living in extremely appalling conditions, with some sleeping on the floor.

These prosecutions form part of Hounslow Council’s ongoing work to tackle criminal landlords and improve the standards of private rented accommodation in the borough.  Residents are encouraged to report any concerns about criminal landlords to the council’s Planning Enforcement Team on planningenforcement@hounslow.gov.uk

To help prevent fraud in the private rented sector the Council supports the Government’s Client Money Protection Scheme. Legal requirements mean that lettings agents must display and publish the certificate of membership of the scheme to show that tenant’s money is protected when given to agents, for example for a deposit. Hounslow have taken action for breaches of this scheme against 17 agents, with a total of £30,000 fines having been paid.

“Unfortunately, in the Borough there is a very small number of criminal landlords who shamelessly exploit the vulnerable, this will not be tolerated by the Council and we will do everything within our power to bring these criminals to book. The majority of landlords provide an excellent service to residents by providing good quality homes to rent. We will not let a few rotten apples spoil it for everyone else. If you are aware of criminal landlords or you think people are being exploited please let the Council know”.

“If you are a criminal landlord, watch out because the next knock on the door could be from our Enforcement Officers and the Police.”

From 1 April 2019, property agents in the private rented sector in England that hold client money must obtain membership from a Government approved or designated Client Money Protection Scheme. Property agents must also comply with the “transparency requirements” in regulation 4 of the CMP Regulations, for example, they must display, publish and produce the certificate of membership (if the scheme administrator provides a certificate) and give notice to clients if the agents membership of the scheme is revoked.

Mandatory client money protection is intended to give landlords and tenants confidence that their money is safe when it is being handled by an agent. Where an agent is a member of a Government approved Client Money Protection Scheme, it enables a tenant, landlord or both to be compensated if all or part of their money is not repaid.

“Client money” means money received by a property agent held on behalf of another person in the course of English letting agency work within the meaning of section 54 of the Housing and Planning Act 2016 or English property management work within the meaning of section 55 of that Act. This does not include money held in accordance with an authorised tenancy deposit scheme within the meaning of Chapter 4 of Part 6 Housing Act 2004. However, “Client Money” includes deposits paid to a letting agent before they are protected and unprotected deposits at the end of a tenancy, before they are returned/paid to the tenant or landlord.