An official event has been held to mark the restoration Brentford Bridge, a historic and crucial transport link in West London. 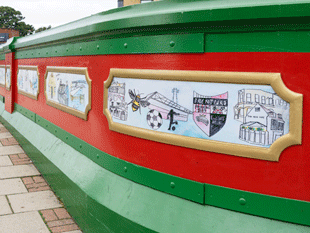 Built in 1818, and with a bridge on the same location since Roman times, the steel and concrete structure has been fully repaired, cleaned and repainted.

Located on the A315 arterial route into London, the bridge provides a strategic crossing of the River Brent and Grand Union Canal with a two-lane carriageway heavily used by pedestrians, cyclists and vehicles each day. The bridge is also wonderful vantage point for residents and visitors and these improvement works further enhance the experience of visiting Brentford.

The works are a result of a project commissioned by the London Borough of Hounslow, in partnership with the London Wildlife Trust, the Canal & River Trust, Holiday Inn Brentford, JCDecaux, Hounslow Highways, Octink and The Green School Trust.

Showing off their artistic skills, pupils from nearby Green School for Boys and Girls have adorned the impressive structure with their artwork which reflects the history of the area and local wildlife.

The canal bank surrounding the bridge has been transformed from a wasteland with litter, and cleared by staff volunteers from nearby business, JCDecaux.

With the support from London Wildlife Trust, invasive plant species such as Japanese knotweed, buddleja, dead trees, encroaching scrub and much litter has been removed, enabling the underlying flora and fauna to flourish, as well as clear the obstructions along the canal bank for boaters passing by.

Partners from the project gathered on the bridge on Friday, 8 October and heard speeches of thanks.

“A huge thank you to everyone who has helped with this fabulous project, especially the pupils whose artwork looks so impressive.  We have preserved a crucial and historic transport link, increased biodiversity in the area and made the riverbank an attractive destination for the local community and visitors.

“The bridge has never looked better and it’s a fitting tribute to its long history in the borough.”

“We are delighted to have played a key role in restoring and enhancing the land by the Brentford Bridge, including helping the reedbed to recover, so it can provide an important refuge for birds in the future.  That a pair of mute swans nested in spring this year is, I believe, testimony to these improvements. We intend to complete our work here with the installation of a kingfisher nesting bank later in the autumn.”

“As a long-term partner of the London Borough of Hounslow JCDecaux has had the absolute pleasure of working with the council on this regeneration project. Not only has it helped regenerate an area close to our office, it has also brought our internal teams closer together and helped strengthen the bond between JCDecaux and the council.”

“We are so proud of being part of the project team that resorted Brentford bridge and surrounding river banks. It looks great and we hope our guests enjoy looking at it as much as we do.”