Charities are the winners as the Mayor has a ball

More than £13,000 was raised by the Mayor of Hounslow for charity at her inaugural ball. 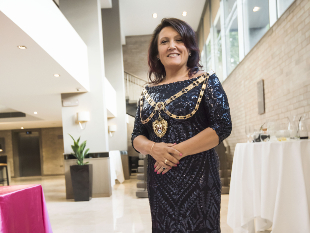 More than £13,000 was raised by the Mayor of Hounslow for charity at her inaugural ball.

The event held at the Clayton Hotel, Chiswick on Saturday, 1 July, was the first of what will be many fundraisers the Mayor, Councillor Sue Sampson, will be hosting over the forthcoming year as she looks to raise money for Pink Ribbon Foundation and Refuge.

Over 250 guests generously donated and bid for prizes in the auction and raffle, which included a two-week holiday in Tenerife, tickets to watch cricket at Lords and a family pass to visit Syon House and Gardens.

The Mayor’s fellow councillors helped the evening go off successfully, as well as many people from different communities and local businesses across the borough. Representatives from both charities supported by the Mayor, also attended.

Pink Ribbon Foundation –  is a grant-making trust with a mission to fund projects and provide financial support to UK charities which relieve the needs of people who are suffering from or who have been affected by breast cancer.

Refuge – is the country’s largest single provider of specialist accommodation and support to women and children escaping domestic violence.

The total amount raised will be split between both charities and Barclays Bank has also stepped in to double the amount raised in the raffle.

The Mayor, Cllr Sampson said: “It was a truly fantastic evening at which we raised over £13,000 for both Pink Ribbon Foundation and Refuge, which I am absolutely delighted about.

“Thanks to all those who donated prizes and who gave so generously. These are two such worthy causes and I am happy that we have been able to kick off the fundraising in such a brilliant way.

“This is only the beginning though and I am determined over the next 12 months to do all I can to raise funds so that these charities can help people, including our residents across the borough.

“As Mayor, I have set myself this fundraising challenge and next on my list is a parachute jump on August Bank Holiday weekend. I hope as many people as possible can support me by sponsoring me

“These charities mean a lot to me personally and I know they are making such a difference to the lives of vulnerable people in our borough and I want to continue to help them do this.”