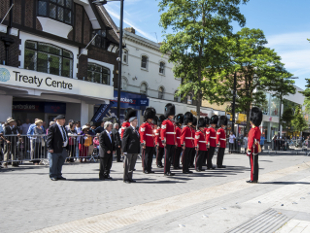 As the main national Armed Forces Day (Saturday 24 June) event this year was held in Liverpool, it was decided to mark the day in Hounslow on Monday instead.

After a parade through the town centre, a service was held commemorating the sacrifices that serving men and women of the armed forces make on a daily basis.

The National Anthem was sung and the special flag for national Armed Forces Day was raised, before Armed Forces representatives and guests attended a reception in their honour.

The Mayor of Hounslow, Cllr Sampson said: “It was a privilege to be able to welcome representatives from our local Armed Forces and pay tribute to what they do for us.

“As Mayor of Hounslow, I was very proud to stand there today with them. Indeed, we should all be very proud of the service men and women that protect our freedom.

“But for me, being proud is not enough. We must remember that our Armed Forces are continually facing challenges and need our support. Not just while they are actively serving, but afterwards as well.

“On behalf of Hounslow, I will ensure we continue to raise awareness of the courage and fantastic work of our Armed Forces and that this is recognised across the borough.”