The UEFA EURO 2020 trophy visited the Brentford Community Stadium today as part of the London stop of the tour across the tournament’s 11 host cities. 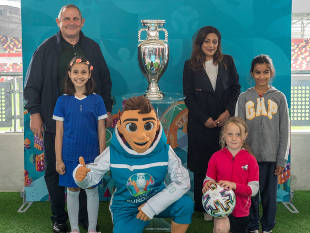 Its arrival in London comes after stops at Budapest, Copenhagen, Munich and others, and marks one week to go until the competition kicks off in Rome, as excitement builds for football fans in London and across the world.

As well as receiving the Men’s Trophy, the Hounslow event showcased the Women’s Trophy in anticipation of the UEFA Women’s EURO in 2022.

Brentford Community Stadium will host four EURO 2022 fixtures, including the first quarter-final of the women’s tournament.

The trophies were welcomed to the stadium by the leader of Hounslow Council Steve Curran and Councillor Samia Chaudhary, Cabinet Member for Leisure Services. They were joined by girls from the local Wildcats, an FA-sponsored football club at Nishkam School, and partners Middlesex FA, Lampton Leisure, Sport Impact and Brentford FC Community Sports Trust.

“What an honour it is to welcome the EURO 2020 trophy before the first game kicks off in Rome in 5 days’ time. It’s visiting Hounslow to mark the borough’s footballing achievements and the role Brentford Community Stadium will play in the upcoming UEFA Women’s EURO in 2022.

“We’re immensely proud of the football that’s being played in the borough, with Brentford F.C. joining the Premier League and the surge of grassroots women’s football ahead of the EURO 2022.

“The positivity of the EURO 2020 games is precisely what we need after a difficult year, and a catalyst for the recovery we need to see after the pandemic.  I know the whole of Hounslow will be behind England to win the tournament, come on the three lions.”

Vicky Kelly-Graham, from the Wildcats club at Nishkam School, said:

“The Women’s EURO 2022 hosted at home in a stadium on our doorstep is a once in a lifetime opportunity for girls and boys in the borough.

"The tournament will help create positive role models for boys and girls within the sport, helping to inspire them to keep active and healthy.

"The legacy of the WEURO is vital to the community and sport, providing the perfect opportunity to generate much-needed funding and investment in grassroots football.

"We hope it will create opportunities across the country, engaging girls at all levels of the game, from playing, to coaching, to officiating.”

The UEFA EURO 2020 trophy is visiting other key local community venues across the capital before finishing its journey at Wembley Stadium tomorrow.  Wembley is set to host eight games including England’s group stage matches, both semi-finals and the final. 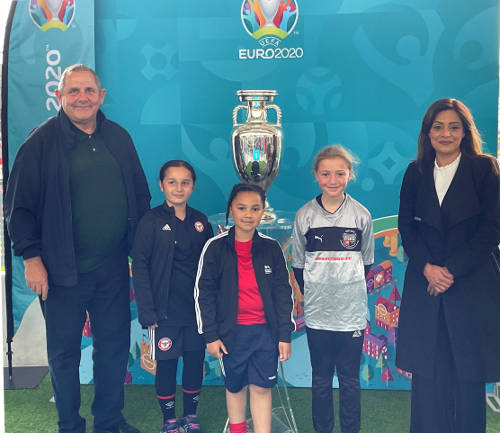 The EURO 2020 trophy with leader of Hounslow Council Steve Curran and Councillor Samia Chaudhary, with members of the local wildcats. Credit: London Borough of Hounslow 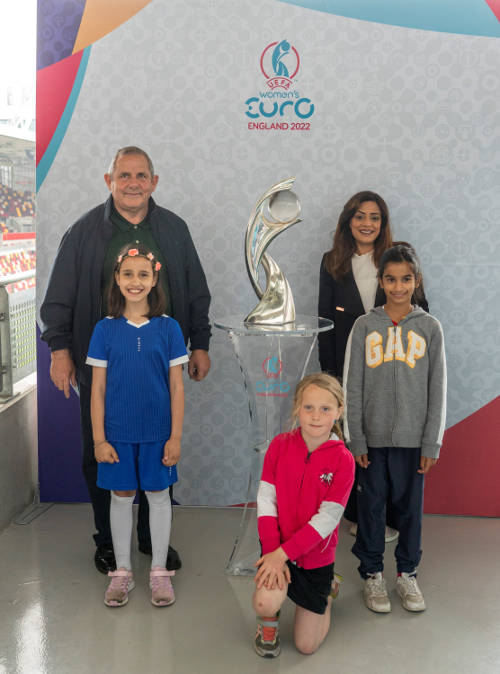 The EURO 2022 trophy with leader of Hounslow Council Steve Curran and Councillor Samia Chaudhary, with members of the local wildcats. Credit: GLA