As part of Green Dragon Lane estate’s £9.5 million transformation, 11 hidden homes have been created from vacant mezzanine areas within each of the 6 Brentford Towers. 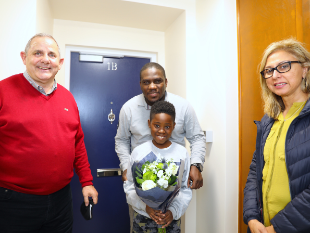 These four 4-bedroom, five 2-bedroom, and two 1-bedroom flats, delivered by the Council’s development team, will provide much needed council homes for those people waiting on the council’s waiting housing register.

Originally the mezzanine floors, where the new flats are, had consisted of external covered areas, stairwell spaces, electrical and storage rooms. The work carried out involved stripping out the existing services and building flats in its space with new lobbies, kitchens, bathrooms, entrance and fire doors, new ceilings, and plastered walls.  New perimeter walls and windows were also fitted, and new terraces areas were formed as part of the refurbishment.

Mr Kiala, a new tenant who has been allocated one of the hidden homes at Brentford Towers, said: I love the brand new two-bedroom property and the way the flat has been designed really suits a family. Having a playground right outside is such a bonus for my son to be able to play in. My family and I have been waiting for a property for a long time as we were previously living in a one-bedroom property which was overcrowded. I am really grateful to the Council.”

Simon Wood, UK Project Manager for the Cruyff Foundation, said: “We’re delighted to build the Cruyff Court Brentford Towers through the grant of the players of the People’s Postcode Lottery, London Borough of Hounslow and the partnership with Brentford Community Sports Trust. We hope this court will inspire children, young people and local community to be active, have fun and develop themselves socially, mentally and physically. It is our newest Cruyff Court in the UK and we look forward to seeing it in use.”

Cllr Steve Curran, Leader of the Council, said: “I was delighted to meet Mr Kiala and his son who have just moved into their new 2-bedroom Council home. I visited the estate with Cllr Lily Bath, Deputy Leader and Lead Member for Housing to inspect all of the improvements that have been going on for the last couple of years, these have made a real difference to the lives of the residents and as you can see from the picture, the Kiala family are very happy with their new home”.

The Council has delivered this programme of improvement works with a total investment of circa £9.5m. This included repair works on the six tower blocks totalling £7.3 million to undertake structural improvements, extensive concrete repairs, external redecoration throughout, window replacement and refurbishment to all communal lobbies/concierge areas.