The countdown begins towards a record-breaking event coming to Brentford Community Stadium that promises to be the major football tournament of summer 2022. 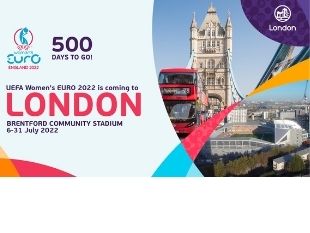 UEFA today unveils a brand-new identity for UEFA Women's EURO 2022, which kicks off 500 days from now.  The 2022 edition in England promises to be the biggest women's football event in UEFA history, deserving of the fresh, open and contemporary look that reflects the strength, diversity and ever-growing popularity of the game. "We’re thrilled to share this new identity for the UEFA Women's EURO 2022," said UEFA chief of women's football, Nadine Kessler.

"This new branding brings a fresh look and eye-catching feel for the tournament as we begin the countdown to next summer. We can't wait to see this emblem across host cities, stadiums and television when the action begins in 500 days' time."

“The Women’s EURO’s Football 2022 is a fantastic competition. It doesn’t get much better for Hounslow, putting us on the international women’s football map. Brentford Football Club will be hosting games at the new Brentford Community Stadium.

“I’m sure it will attract many football fans, not only from Hounslow but from the UK and the rest of Europe.

“The Council will be working with the tournament organisers to make this a huge success that we can all be proud of.”

“We are excited for the UEFA Women’s EURO tournament to be hosted locally at the Brentford Community Stadium and Wembley stadium in the summer of 2022. Working closely with the London Borough of Hounslow, alongside other key partners, we are  delighted to be able to deliver legacy plans and increase opportunities for women and girls in football, as well as promoting tournament engagement across the local football and wider communities.”

“When I was growing up there wasn’t much provision for girls to play football. At secondary school you always had to play in the boys’ teams, or not at all. I started my football journey at Bedfont Sports when I was 10. This made me passionate about making sure females get the same opportunities as men. We have supported the local community by setting up free girls only football sessions through our Premier League Kicks programme. The female game has grown massively, and I hope it will continue to do so. It is fantastic to be able to see girls training and playing and being a part of their development.”

“Sport Impact is committed to enhancing the physical education, physical activity and sport experience of all young people in Hounslow. The UEFA Women's EURO 2022 is a fantastic event for us all to look forward to. We are working closely with The Football Association and other national, regional and local partners, to ensure that we can deliver a lasting legacy that inspires young people. This globally high-profile event presents us with a fantastic opportunity to significantly influence this.”

Originally scheduled for 2021, the tournament was, like UEFA EURO 2020, postponed by a year. This guarantees increased exposure for women's football in a summer without other major football events.

As well as the new logo, extensive coverage of all 31 matches at UEFA Women's EURO 2022 will feature on free-to-air television, radio and online as 16 nations compete to be crowned European champions. This will ensure anyone, from committed or curious fans to the next generation of stars, can tune into the tournament and be part of the excitement.

"By moving the competition to 2022, we guaranteed that the biggest women's sports event in Europe receives the exclusive platform it deserves," Kessler said. "Alongside the English FA, we are confident of delivering a first-class tournament that will attract global attention and media coverage, leaving a legacy to inspire many more girls, and boys, to take up the game."

In another sign of the growing status of women’s competitions, the Video Assistant Referee (VAR) programme will be used throughout the finals for the first time.

UEFA's new ticketing portal is now open for fans to register for early access to tickets and stay up to date on all the latest information ahead of next year's finals.
Sign up for information on tickets for UEFA Women's EURO 2022 here.

For more information regarding the current standings and already qualified teams click here.