Hounslow Council will once again be hosting a special event for this year’s Armed Forces Day. 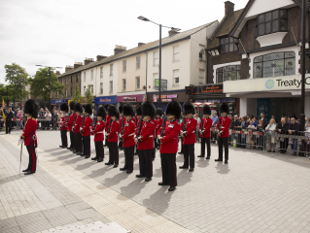 Hounslow Council will once again be hosting a special event for this year’s Armed Forces Day.

A parade will take place in Hounslow High Street on Monday 26 June from 10.30am followed by a ceremony in Holy Trinity Church, to commemorate the service of men and women in the Armed Forces currently on duty as well as the service of veterans and cadets.

Now an annual event, Armed Forces Day is unlike Remembrance Sunday or Armistice Day which is held mainly to remember those who have fallen in the line of duty.

The main national Armed Forces Day event this year will be held in Liverpool on Saturday 24 June and it was decided to mark the day in Hounslow on Monday 26 June instead.

Among those representing the Armed Forces at the parade and service, will be the 1st Battalion Irish Guard, Ghurkha veterans, Royal British Legion, British Army veterans and local cadet forces.

The Mayor of Hounslow, Councillor Sue Sampson will lead representatives from the council at the event, along with other dignitaries and guests.

Cllr Sampson said: “Armed Forces Day is our chance to say a big thank you to the men and women who risk their lives to protect us around the world.

“Armed Forces Day is a national event and rightly celebrated across the country.

“I know the residents of Hounslow will once again join us at the parade to show our pride and gratitude to the Armed Forces.”