Council announces new mayor and other appointments for 2017/18

Councillor Sue Sampson, ward member for Isleworth, has been elected Mayor of Hounslow for the municipal year 2017/18. 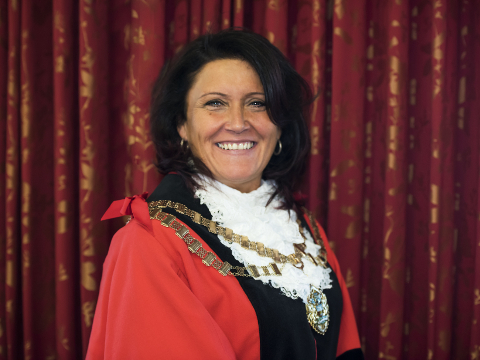 Councillor Sue Sampson, ward member for Isleworth, has been elected Mayor of Hounslow for the municipal year 2017/18.

The appointments were made at the annual meeting of the council on Tuesday.

Speaking after her election to the office of Mayor for the next 12 months, Cllr Sampson said: “I am extremely honoured to be elected Mayor of Hounslow and can’t wait to meet as many people as possible who make up all the wonderful communities we have here.

“I am looking forward to visiting many places, and helping and supporting the causes and events that mean so much to all our residents.

“It is a great privilege to serve as Mayor of Hounslow and I am committed to representing our vibrant borough and everything it stands for with pride”.

As Mayor of Hounslow, Cllr Sampson’s chosen charities for the year are Refuge and the Pink Ribbon Foundation

Cllr Malhotra is looking forward to taking up his ceremonial role in Hounslow.

A minute’s silence was held at the meeting as a mark of respect to those who died and were injured in the Manchester terror attack.

As well as the election of the mayor, there was also the cabinet make-up for 2017/18.

The new faces are: Councillor Candice Atterton, ward councillor for Hanworth ward, who takes over the portfolio of Jobs, Skills and Opportunities.

Councillor Samia Chaudhary, ward councillor for Hanworth, has the portfolio for Green Policy and Leisure.