Fanfare and applause was rightly given as the seven local branches of the Royal British Legion [RBL], were given honorary Freedom of the Borough of Hounslow last night [Tuesday] 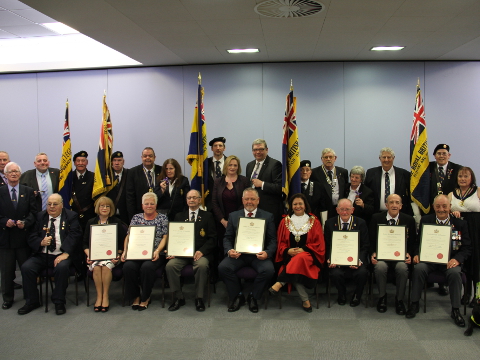 Hounslow is the first Council to present the accolade to all of the RBL branches in its borough.

Beginning with a Mayoral procession, the event took place at the Lampton Park Conference Centre, next to the Civic Centre in Lampton Road.

Councillor Ajmer Grewal, Mayor of Hounslow and Councillor Steve Curran, Leader of Hounslow Council led the way for the Council to explain that the dedicated long service that supports so many veterans and current serving personnel and their families, was the reason behind bestowing the Freedom of the Borough.

The Royal British Legion was formed on 15 May 1921, bringing together four national organisations of ex-servicemen [later to incorporate servicewomen] that had established themselves after the First World War.

The main purpose of the RBL was to care for those who had suffered as a result of service in the Armed Forces during the war, whether through their own service or that of a husband, father or son. This included the effect an injury had on a man’s ability to earn a living and supporting his family once returned from war or a war widow’s struggle to give her children an education.

Andre McGill, Hounslow branch chairman and Poppy organiser for RBL, said: “It was a great honour for the seven RBL branches in the borough to receive the Freedom of the Borough.

“The branches have worked tirelessly for over 90 years around the borough raising awareness of the RBL and we’re proud to serve our borough at Remembrance Day and all year round.

“A big thank you to Hounslow Council and everyone in the borough from all our branches for this honour.

The award is conferred to people of all walks of life who have given outstanding service to the people of Hounslow.

Not since 2009 has the Freedom of the Borough been presented to an organisation.

Councillor Steve Curran, Leader of Hounslow Council, said: “The Freedom of the Borough has been given to all seven branches of the Royal British Legion for the tremendous work they do.

“Each branch is an integral part of our community. I think all of us at some point have had a connection with the Royal British Legion and we all know how much support is given to so many.

“To present the Freedom of the Borough to them is the biggest honour we as a Council can give and it is also an honour for us to be able to do this.”