A national summit is being held to explore the plight of communities which risk being devastated by the downturn in aviation, and to call on government for targeted support. 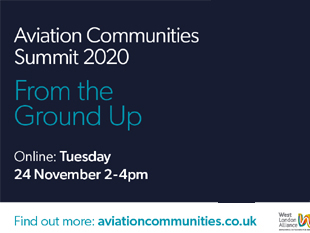 ‘Aviation Communities 2020: From the Ground Up’ has been organised by Hounslow Council, alongside partners in the West London Alliance. Taking place on Tuesday, November 24, it will be attended by prominent parliamentarians and senior council leaders across the UK and highlight communities around airports who have been disproportionately affected by the coronavirus pandemic.

Home to much of the workforce that powers Heathrow Airport, the UK’s largest private sector employer, the effects of reduced activity at the airport are felt particularly acutely for Hounslow’s communities, many of whom whose livelihoods depend on the wider sector.

Independent research by Oxford Economics forecasts that up to £1 billion could be lost from Hounslow’s local economy due to the downturn at Heathrow alone, and more than 40,000 jobs are at risk due to the wider impact. Official figures from August reported 40% of the borough’s working population – 72,000 residents - were either unemployed or on furlough.

Across West London, Oxford Economics puts the cost to the local economy from reduced operations at Heathrow at £4 billion. Major impacts are expected to be seen in other communities across the UK which have relied on airports and the thousands of associated businesses.

The summit is the first concerted effort to bring together representatives from aviation communities nationally and debate the challenges and opportunities to provide targeted support and intervention and the future of local economies and jobs. It is expected to see the formation of an Aviation Communities Task Force to call on the Government for an Aviation Communities Fund.

Council Leader Cllr Steve Curran said: “Hounslow is not alone. Hundreds of thousands of people in communities reliant on the aviation industry are facing widespread unemployment, deprivation and barriers to securing future work. Those communities, so impacted by the coronavirus pandemic, are currently missing from the discussion around the impact on airports and airlines.

“The Government must recognise the devasting plight of aviation communities. They must be treated differently with a place-based approach. We need an Aviation Communities Fund for targeted investment in training, reskilling, low carbon jobs and local infrastructure which would support wider recovery to enable Britain to build back better and greener.

“This Summit is the start of raising the levels of consciousness within government, and with other key people and organisations, about the very real plight our communities are facing. We need a national, shared commitment to finding solutions together.”

To register and for further details please visit www.aviationcommunities.co.uk