Hounslow Council has installed new signs and produced a map to help direct walkers and cyclists to and from Barnes Bridge and east Chiswick. 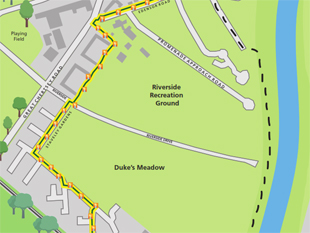 The closure of Hammersmith Bridge has meant longer journeys for many people who live in the area. Hounslow, Richmond, and Hammersmith & Fulham councils have been working together to improve signage, access and travel advice for people, local groups and schools.

During the lighter months many people used the towpath which runs alongside eastern edge of Dukes Meadow. However, this route is unlit, so very dark at night.

The Council has now installed signs and created a downloadable map for people which shows the quickest, fully lit alternative. The route, which runs through Staveley Gardens and Alexandra Gardens, takes an estimated two more minutes to cycle and six more minutes to walk than the Dukes Meadow towpath.

Cllr Steve Curran, Leader of Hounslow Council, said: “We know the closure of Hammersmith Bridge has caused a great deal of inconvenience for many residents and businesses. Hounslow Council officers have been working with their counterparts in Richmond and Hammersmith and Fulham to see how best we can mitigate the disruption to people.

“Public safety is of paramount importance and part of our collaborative approach has been around improving signage to existing routes; liaising with the local community, schools and other stakeholders about the various options; and exploring the possibility of new routes for pedestrians and cyclists.

“There were understandable concerns about using the towpath in the dark so we have identified a well-lit route which pedestrians and cyclists can use when travelling from Barnes Bridge to Chiswick. This route is slightly longer but far brighter, and now there are clear signs and a map available people will find it easier to use.

“Some people have raised concerns about crime in this area. According to the latest data available to the Council, the crime rate around Dukes Meadows is relatively low and similar to surrounding areas. There is no record of a large increase in crimes over darker months.

“Finally, we should not lose sight that the Government needs to step up with an action plan for Hammersmith Bridge. This major infrastructure is of national significance and needs to be repaired as soon as possible. Though Transport for London, Hammersmith & Fulham, and Richmond councils are the lead local organisations in managing this issue, it is disappointing that Hounslow Council has not been asked by the Government to join them on its taskforce.”

Hounslow Council has invested more than £500,000 on Dukes Meadows and nearby infrastructure over recent years, including installing LED lighting in some areas, pedestrian access and road verges improvements, creating better visibility through trees and invasive species management, installation of CCTV, traffic calming measures, and access improvement to allotments. Further investment is planned to create a pedestrian bridge that can increase connectivity and improve access during the day.